The Catholic Church “takes the field”: shops should be closed on Sundays

Confesercenti and the Italian Episcopal Conference (IEC) have launched a signature-collecting campaign called “Libera la domenica” (Let’s free Sunday) in order to change the law on liberalization of the shops’ opening hours. Monsignor Franco Agnesi says, “this campaign concerns everybody’s dignity.” In Varese 110 signatures have been collected in one hour. 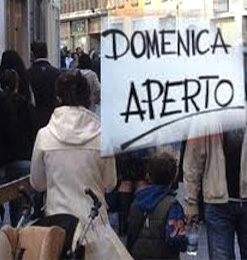 “Remember the Sabbath day.” After the definitive liberalization of the businesses’ opening hours, which is contained in the “Salva Italia” decree of the 1st of January 2012, it has become almost impossible for retailers to respect the third commandment. On this topic, Confesercenti and CEI have launched the campaign “Libera la domenica”, a collection of signatures in order to modify the law on liberalization, which dates back to 2006, and to re-establish the regional trade regulation. Cesare Lorenzini, president of Confesercenti, speaks of “serious problem”. It is such a serious problem that 110 signatures – among which, the Mayor’s, Attilo Fontana – were collected in less than one hour by the vice-delegate Alessandro Milani last Sunday on the porch of the Basilica of San Vittore.

Varese is certainly a town of shopkeepers, but considering the campaign’s first results, it respects the religious holidays. Gianni Lucchina, director of Confesercenti explains, “the figures show that the liberalization of Sunday opening hours is wrong. 85,000 small-sized businesses in Italy are risking to close down. Only large retailers have profited from it, and, without rules, the freedom of competition does not protect competition itself.” The current law does not force shops to stay open on Sundays, but small retailers somehow had to accept the challenge in order to respond to the “attack” of large retailers, who can count on more considerable troops that guarantee the personnel’s turn-over. The figures declared the failure of Sunday openings: retailers’ sales have decreased by 8.6% since 2008, the GDP has decreased by 2.4% and unemployment has raised by 10%. Lucchina adds, “in Germany, the GDP grows by 3%, but shops are closed on Sundays.” Italy, among the powerful countries of the Old Continent, is the only country that has the total liberalization of trading hours, that is to say 24h, whereas in France, Belgium, Germany, Spain and the Netherlands shops stay closed. Sweden allows a 5-24 opening, Austria a 6-18 opening, whereas in the UK it depends on whether the shop has a floor area of more or less than 280 square metres. The Episcopal Vicar, Monsignor Franco Agnesi, who is used to working on Sundays, starts from the campaign’s slogan “Always open on Sunday? How about no” and thinks about a topic that goes beyond the crisis and the surrounding difficulties. Agnesi says, “this campaign is not meant to be confessional, because it concerns everybody’s dignity and reactions: during a holiday, people can relax and their relations will be in the name of generosity. The topic of gifts and generosity, which is present in the encyclical of Pope Benedict XVI, “Caritas in veritate”, is not something that comes after work, but it is inside economy itself, it is a change factor.” Confesercenti’s objective is to collect at least three thousand signatures in the province of Varese, and to involve trade unions and trade confederations.