Small businessmen no longer have faith in politicians

The front row of the Napoleonic Hall of Ville Ponti was full of MPs, MEPs, and regional and provincial councillors 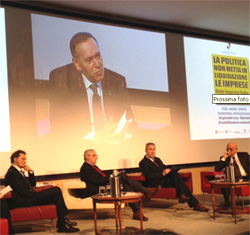 For over two hours, Daniele Marantelli, Giancarlo Giorgetti, Lara Comi, Raffaele Cattaneo, Alessandro Alfieri, Fabrizio Taricco, Stefano Tosi, Luca Marsico, Luca Daniel Ferrazzi and Andrea Bagaglio sat in silence. This must surely be a record, especially when we consider that we are in the middle of an election campaign. And yet, the politicians present at Ville Ponti, for Rete Imprese Italia Day, did indeed sit in silence, even when more than a few businessmen (there were more than five hundred in the hall) called them into question directly, with what was not exactly a friendly tone. “If politicians want our vote, they’re going to have to give us a reason.”

Only when the morning was over, and after they had listened to the scathing diagnosis by Carlo Sangalli, the current chairman of Rete Imprese Italia, via link from Rome, and by the representatives of the associations, were they able to say something. In actual fact, Comi and Marsico managed to get to the exit before the end (11.45 a.m.). And when Sergio Bellani, the director of ASCOM, thanked them publicly for stopping to listen to the various speeches, one voice from the audience shouted, “It’s a habit of theirs.”

At this point, the director of Confesercenti, Gianni Lucchina, was even harsher with his criticism. “For years, politicians have talked a lot, with terrible results; it’s time they listened to the people who get up at 5 in the morning to raise the shutters.”

Disillusionment is the sentiment dominating the small businessmen at the moment. The fact that craftsmen and tradesmen no longer have faith in Italian politics was clear from the ovations from the audience after the speeches by the representatives of the various associations. The problem that micro and small businesses have today is understanding how to go on, and above all, whether they can go on. The clarity with which Giorgio Angelucci (the chairman of Uniascom) examined that most evil of evils, the tax burden, the analysis by Lorenzo Mezzalira (Confartigianato Imprese Varese) of credit and of loan consortia, the cutting remarks by Franco Orsi (the chairman of CNA) about the cost of bureaucracy, the bitterness of Cesare Lorenzini (the chairman of Confesercenti) over the inability to guarantee a future for young people, and the realism of Giuliano Terzi (the chairman of Casartigiani) when defining the need for a change, all left their mark.

Whatever the direction, for Lorenzini, “there’s not even the faintest light at the end of the tunnel.”

And the words of Mezzalira, that “the banks hide their fortunes in foundations, and refuse to give money to the real economy,” did nothing to bring the end of the tunnel any closer.

Businessmen are not asking politicians for discounts, but only normal conditions, “starting with calls for tenders, which are incomprehensible, even for the experts,” said Orsi. A sort of entrepreneurial pride is calling for new social esteem, which was summarised in a comment by Terzi, “Businessman doesn’t rhyme with tax dodger.”

“In three months time, we’ll still be here, with the government and the Region,” Bellani said, at the close.

“And there’s no going back from here,” one businessman retorted loudly.