The market of Luino, the street traders proposed “their” project

Using the XXV Aprile street, but divided in half, instead of the “Quinta locale”, this is the project of the traders “to keep the market of Luino, halved by the PGT, alive. 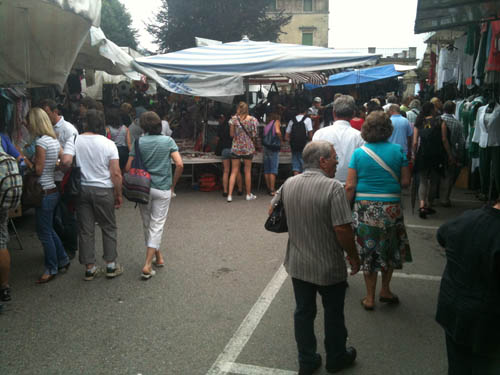 In an area delimited by a gate and run-down to the point that it needs to be fenced off because of the danger that parts of the wall will fall down; it is here that the new PGT of Luino decided to move part of the historical market of Luino, in an area close to the railway station. This decision is considered to be a tragedy by the street traders of the biggest and oldest market in the province. However, they decided to face it concretely: by recruiting a town planner to study the situation and propose to the Administration a concrete alternative which has been presented today, 14th January 2013, in the head office Ascom in Varese.

The solution was proposed by Claudio Scillieri, an architect and a town planner, who conceived an alternative by looking around Lake Maggiore and by starting from a fundamental point, “The current proposal divides the market in two sections, separated by about 200 metres of road,” the architect explained, “However, if the market develops in two separated parts, there will be consequences for all, especially for the market of Luino. Although it is the street traders the most affected, because they will have the minority of the stalls, those that would be separated.”

“The hypothesis proposed by the Administration “plans to use an area which is separated by the rest of the market,” continued Scillieri, “The ‘Quinta locale’, which isn’t a street, but it’s a neglected lane with run-down buildings, close to the railway station but delimited by a gate, although it’s always open, and people getting off the train can’t directly see it. However, by using the XXV Aprile street, which overlooks directly the railway station, people arriving by bus or buy train can immediately see the market: a sight that doesn’t finish, because our solution plans to create a unique path, starting from that street until all the historical part of the market.”

But what is the proposal to reach an agreement between the municipality, the prefecture, the citizens, the street traders and the tourists? First of all, an idea that does not block completely the traffic in the centre.: a difficult situation for the residents, who don’t have much to do with the market, and also for the prefecture, because of the objective impossibility of having emergency services blocked once a week. “Therefore, the proposal is to open XXV Aprile street to the stalls, but only on one side, by allowing the one-way direction to cars on the other side.” Is it a difficult and risky proposal? “No, it isn’t. And it isn’t even so strange: it was put into force in Verbania, Intra and Arona, and even in the market of Como.” There is a similar situation in the former Svit area, which would allow eventually to replace all the 61 stalls that were “turned out”.

THE MARKET OF LUINO, AN HISTORICAL RESOURCE

However, the solution is already fixed by the municipality for now: all the street traders who are not in the two main streets will end up in the area in the Italian Railways called “Quinta locale”, “However, the stalls placed in that area seem to be placed in a graveyard,” explained plainly Carlo Riva, a fiduciary Fiva Ascom in Varese, “This stalls will starve if they are there, especially in a period of crisis like this one.” Moreover, they would be in a run-down area, which won’t be reclaimed for the arrival of the market: as a result, there will be unsafe walls behind the street traders’ vans.

And there is the economic and cultural part of the market of Luino that boasts 500 years of activity, a book dedicated to it (“Le avventure di Pierino al mercato di Luino” by Piero Chiara), it is internationally known and is visited by thousands of people coming from Switzerland and other countries, “The small town, which normally has 10 thousand inhabitants, reaches 40 thousand people on Wednesday, with all the consequences: either for the planning of the town or for the economic movement,” the town planner explained.

The market accounts for 375 stalls (to give an idea, the market on Saturday in Varese accounts for 180 ones, in a town that has 80 thousand inhabitants, editor’s note): a stunning figure, although there were periods in which it accounted for more than 400. Moreover, it affects significantly the taxes of the municipality, “Lately, the stallage (the tribute for the occupation of a public area, editor’s note), has been almost doubled, in order to reorganise the municipality’s balance,” explained Rodolfo Calzavara, a street trader and a provincial fiduciary for Fiva Confcommercio, “It’s a figure that brings in the municipal cashes about €600 thousand per year. In short, we are a big resource, and we wouldn’t deserve to be put in difficulty.” At the next market, on Wednesday 16th January, the traders organised a gazebo to explain this solution to people and to make the town aware about the commercial but especially cultural and civic importance of keeping the market in the living part of the town.