Marco Mengoni will be visiting the Casa del Disco on Friday 15 November, at 4 p.m., to present his latest CD, #prontoacorrereilviaggio, which also contains a DVD of part of his live concert in Taormina. 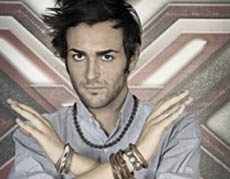 Marco Mengoni is coming to Varese. This news will certainly excite his many fans in the province. His visit is on Friday 15 November, at 4 p.m., at the Casa del Disco, where the singer will sign autographs and meet his fans. Those who buy the artiste’s new CD will be given priority; the pass to get in and meet the artiste will be the new double CD+DVD, which, for the occasion, will cost €18 (instead of €21), together with the receipt issued on the day by the Casa del Disco.

The announcement of the Varese visit was received by the followers of his Facebook page, with 300 likes and a stream of comments.

The occasion is the launch of his new CD, #prontoacorrereilviaggio, which will be officially on sale from 11 November, and which Mengoni wanted to record after a year of successes.

Nine platinum discs, 7 Wind Music Awards, 100 million views on YouTube, victory at the last Sanremo Festival, Revelation of the Eurosong 2013, and 40 sold out concerts in 2013; these are the results that tell the story of this 24-year-old who became known to the general public, thanks to his participation in X-Factor.

#prontoacorrereilviaggio is an album that Marco really wanted to make, even more than his fans (his “army”). The triple box contains: a live version of the album #prontoacorrere, a DVD, with backstage footage, of a very fortunate year, with part of the concert in Taormina. In addition, there is the complete version of the CD #prontoacorrere. The live concert was recorded in the wonderful Ancient Theatre, in Taormina, on 26 August, one of the most exciting dates on the tour. #PRONTOACORRERELIVE includes all the tracks of the album with the same name, from which the enormously successful singles “L’Essenziale” (the winning song at the Sanremo Festival), “Pronto a Correre”, “Non Passerai”, and “In Un Giorno Qualunque” were taken.

The DVD #prontoacorrereilviaggio is a film-concert that retraces the year of Marco Mengoni, with pictures, backstage footage, exclusive interviews, as well as the amazing pictures recorded during the Taormina concert.