The move of the Ogliari museum has been completed, from September the first part is visitable

Locomotives and trams have been transferred, now the challenge starts to restore them after recent years of neglect, to show them to visitors 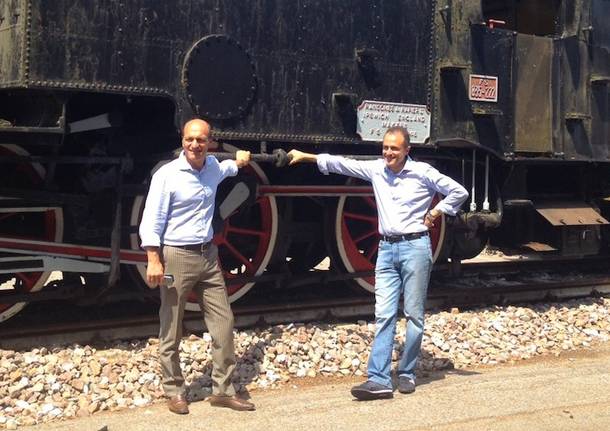 After less than a year after the donation of the collection (9 July 2014), the move to Volandia of dozens of locomotives, carriages and trams of the Museum Ogliari was completed. It was announced Friday morning by the president of the Park Museum of Flight Marco Reguzzoni – along with the president of the Province of Varese Gunnar Vincenzi – that the first part of the exhibition will be open “from 4th September.”

“The move is basically over,” said Reguzzoni. “We now have a mountain of work to do here in the next 10 years.”
The preparation of the tracks (and to some extent the move) was followed by Ferrovie Nord Milano, which has provided 60 thousand Euros, equal to three years of contributions to Volandia. Cranes and trailers have moved huge pieces such as the locomotive E626 and other smaller but also more valuable pieces, such as the locomotive of a “Gambadelegn“, the steam tram that linked Milan with the province.

The area where they were placed is outside the perimeter of the museum, but it will become part of the inside with a new fence (“the works start today” ensures Reguzzoni): inside there will be trains and trams but also a green area that will serve as a picnic in the shade of tall trees that surround the railway vehicles. Just outside the new fence will be the pedestrian path from the Terminal 1 of Malpensa. “People who come from outside will follow a new path,” continues Reguzzoni.

With the first opening in September, visitors will be able to access “two different museums with a single ticket” (in the future there will also be the Museo Flaminio Bertoni). The route will firstly include an area inside the historical fence of the Caproni factory (with horse-drawn carriages), then visitors will arrive in the new area with the great railway vehicles. “It was a shame that the territory was likely to miss this collection, this collection, Volandia I think might be the ideal place,” added the president of the province Gunnar Vincenzi. The collection will grow over time: “We have an ambitious goal: a weekly inauguration of restored trams, locomotives or horse-drawn carriages. ”

The transfer of assets from Ranco to Volandia at Malpensa was closely followed by many enthusiasts of railway and rail vehicles, because the collection Ogliari there are also unique pieces, of absolute value (though sometimes modified with too many designs). Some vehicles “just” need to be cleaned and repainted in some parts, while others need significant interventions: the Edison Trams and ATM54 ” Abbiategrasso type”, for example, are among the oldest existing trams in Milan, the wooden boxes are marked by time and neglect, especially in recent years. What will be done? Reguzzoni trusts above all in the ability to replicate, even with the trains, the model tested with planes, bringing together volunteers. “With the Cral of Fnm we had a first meeting to create a group of enthusiasts that will deal with restoring and also to present them to visitors. ” Reguzzoni recalls that Volandia already relies on an army of volunteers: 181 volunteers in the “Friends of Volandia” that take care of aircraft, but then there are the 10 volunteers of the group Gullp (the “Geeks” who manage the drones area), others in the area devoted to space and space exploration.