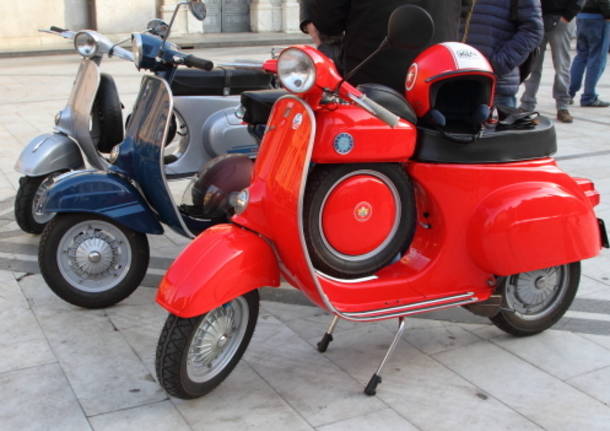 Sometimes it is a picture that triggers passion. As if we were waiting for that when evaluating an experience. It is not like love at first sight but it is almost like it. In its 70 years of life the Vespa has entered the lives of many people also thanks to the cinema. For me it was “Caro diario di Nanni Moretti” that made me want to ride it. It was summer, Rome was deserted and so the director could wander through the sunny streets and rediscover his city. “The neighbourhood I like the most is the Garbatella,” says Moretti. “And I wander through popular areas. I don’t just like seeing the houses from the outside, sometimes I wanna see them from the inside too. So I ring doorbells and I pretend I’m visiting to get info for a film…”

Exactly forty years before him, Gregory Peck and Audrey Hepburn in “Vacanze romane” made it the cult tool of an era. Its production came from Piaggio seven years earlier in 1946.

A name that according to legends was born from Piaggio’s wit because his travelling little beast has “a narrow waist and large bum,” just like the flying insect and equally stingy  in the sense of a fantasy injection, of fun compared to the grey routine of the era.

The project, as Edmondo Berselli told, “was given to the best Piaggio designer, engineer Corradino D’Ascanio, helicopter specialist, world exclusive inventor, though not known, of the first helicopter but also a motorbike hater, thinking they are too uncomfortable, complicated, too manly. He designed the Piaggio, a woman in every way. A hidden engine, like a small plane with imaginary wings. The bike debuted 20 September ’46 at the Circolo del Golf di Roma.”

The engineer was proud of his work and of the Vespa. “The wit of a modern bike with the popularity of a bicycle, the performance of a motorbike, the elegance and the comfort of a car and that’s that.”

It is thanks to this that the Vespa is different to any other bike. For me, after Nanni Moretti, it was Giorgio Bettinelli that triggered the passion that would lead me to tour the Italian coasts in 2010. He, a journalist, started travelling for leisure when he was 40 and since then that has become his job, writing books for Feltrinelli.

The Vespa is one of the symbols of our country. It is synonym of creativity, design, industrial prowess, but also of beauty and freedom.