The 2016 Busto Arsizio Film Festival is about to start

The BAFF is from 12 to 19 March 2016. The special guest on the opening night is Laura Morante. The Mistress of Ceremonies is Matilde Gioli. 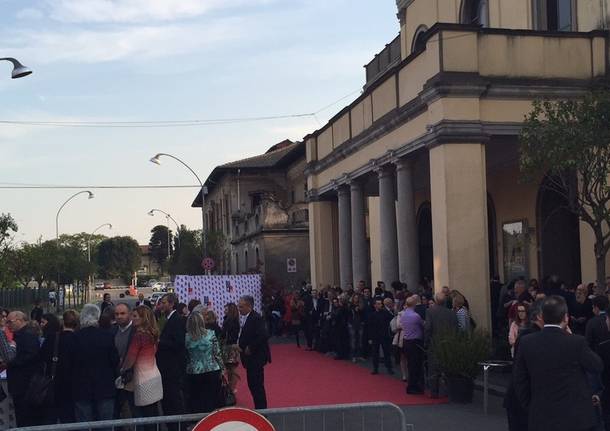 The opening night will have a special guest, the actress and director Laura Morante, who is going to receive the Dino Ceccuzzi Platinum Prize for excellence in filmmaking and, in the best tradition of the BAFF, will meet the public for a warm welcome to the town; Laura will also be presenting the showing of her latest film, Assolo. The opening night promises to be a very full one, thanks also to the presence of the artist Ugo Nespolo, who will be giving the festival audience a preview of his latest short film Shades on the couch.

Matilde Gioli, one of the most interesting emerging film actresses on the Italian scene, has been chosen to be the Mistress of Ceremonies for the Festival. Matilde will have the job of presenting the opening and closing nights, together with Steve Della Casa.

After last year’s tribute to Mario Monicelli, the BAFF’s journey into the history of Italian comedy is continuing: 100 years after the Festival’s foundation, this year, a tribute is being paid to Dino Risi, who will be remembered on a number of occasions. The films that are going to be shown include the documentary, Una Bella Vacanza, by Francesca Molteni, written by Fabrizio Corallo, which retraces the life and works of the Master, Il sorpasso, which is possibly Risi’s best-known, and most iconic work, the episode of the television broadcast La valigia dei sogni, by Simone Annicchiarico and Alessandro Boschi, which is dedicated to the 1962 film made in Rome and Tuscany, along the legendary Aurelian Way, and the documentary by Dino Risi, La provincia dei sette laghi. At the end, there is the preview presentation of a book by Steve Della Casa, published by the Festival, by the Experimental Film Centre and by Luce-Cinecittà, which will be the official catalogue of the great retrospective honouring Dino Risi in such a prestigious location as the MOMA in New York, next autumn. Another guest of the evening dedicated to Il sorpasso (in addition to Claudio Risi, one of the Master’s children) is the director Massimiliano Bruno, who will provide a sort of common thread through Italian comedy.

The heart of the Festival is Made in Italy. With the focus on the most successful Italian filmmaking, and on courageous, hybrid and innovative productions, this section includes the preview of On air: storia di un  successo, by Davide Mazzoli (which is being released on 31 March, for Medusa), the long-awaited film dedicated to the historic and controversial radio programme Lo zoo di 105. There will be also the preview of “Madeleine” by Mario Garofalo and Lorenzo Ceva Valla, which was co-produced by Andrea Osvart; the film is the result of the meeting between the directors and the producer, which took place at the BAFF. And, of course, there is the preview of D.A.D., by the director Marco Maccaferri, who was present last year with a preview of the film. The other films being shown include La nostra quarantena, by Peter Marcias, Italian Gangsters, by Renato De Maria, Teatro alla Scala – Il tempio delle meraviglie, by Luca Lucini and Silvia Corbetta and Era d’estate, by Fiorella Infascelli.

Made in Italy doesn’t end here. Hundreds of students will be in the audience to watch the films, ready, at the end, to talk with the filmmakers, actors, screenwriters, directors of photography, editors and other experts in the world of cinema. This is the tried and tested formula of Made in Italy: Scuole, the historic section of the Festival, which has a declared educational mission, which shows young people some particularly significant films of contemporary Italian cinema. The review, which is considered, by the guests, to be a useful opportunity to investigate the tastes and moods of the young audience, and to have a point of view, that is often unusual, of their work, is organised as a contest: the students are given a double role, that of spectators and judges. The lucky formula is extended with Masterclasses, genuine in-depth analyses of film work, which are being given by Andrea Purgatori and Luca Lucini, this year.

In collaboration with the Union of Italian Film Journalists, the BAFF is hosting the awarding of an acknowledgement dedicated to journalism with pictures, on behalf of a great name of the past, Lello Bersani. The award, which, last year, went to Antonello Sarno, will be given by Laura Delli Colli to the historic radio programme, Hollywood Party, which was an essential reference point for fans of cinema.

And with the Eroi della carta stampata award, for the third consecutive year, the Festival wishes to honour a great figure in Italian film reviewing. This year, the award could only go to Piera Detassis, the editor of the historic magazine CIAK and Chairwoman of the Cinema for Rome Foundation.

The BAFF is also back in the bookshops, with an important date for film reviews and literature. The books James Bond – Fenomenologia di un mito (post) modern, by Matteo Pollone (Bietti Editore), and Pane film e fantasia, by Laura Delli Colli (RAI-ERI) will be presented, preceded by the showing of some episodes of the web-series Ricette e ritratti d’attore, and finally Manuale di sopravvivenza di un attore non protagonist, by Ninni Bruschetta (Fazi Editore). The authors will be present.

The date with Stracult is a must. Marco Giusti is meeting Aldo Lado for the showing of La corta notte delle bambole di vetro, at which the special guest with be Ambretta Sampietro, who organises the event Giallo sui laghi.

This year’s Festival will also include two important conferences, one about the new law on filmmaking and on tax credit, in which Andrea Purgatori, Laura Delli Colli and Paolo Tenna will speak, and one entitled Cittadini A Regola d’Arte, in collaboration with Mediafriends Onlus. It will also provide an opportunity to officially present the short film produced by the Michelangelo Antonioni Film Institute, of Busto Arsizio, which speaks about how sport can have a high social value.

Carte blanche is being given to Elisabetta Sgarbi, who is bringing the journalist and writer Pietrangelo Buttafuoco as a guest.

The closing night will be a big party, with many surprise guests who will be announced during the festival.

Entrance to all events is free.

In addition to the five cinema halls of the “Sguardi d’Essai” circuit in Busto Arsizio (the “Fratello Sole”, “Manzoni”, “Sociale”, “Lux” and “San Giovanni Bosco”), the BAFF 2016 will also be making appearances in Legnano, Castellanza and Fagnano Olona.