The “Hi- tech” Girometta award to the founders of Elmec

Clemente Bellerio and Cesare Corti, the men that founded the company Elmec in 1971, have been awarded. A plaque has also been given to Mr Attilio Fontana, the Mayor of Varese. 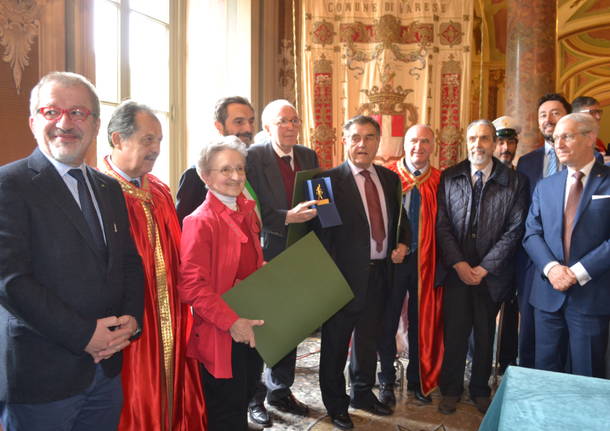 “They’re entrepreneurs, they’re from Varese, and they’re sportsmen.” These are the reasons why the Bosina family decided to award the golden Girometta for 2016 to the accountant Clemente Bellerio and to the engineer Cesare Corti. In 1971, the two entrepreneurs founded the company Elmec, which has always been at the cutting edge in the technology and IT sectors.

“We really feel honoured to receive this reward,” said Cesare Corti, who recalled, “we’ve always tried to support the training of young people, sport and culture,” with a company that has always been at the cutting edge. In the message read during the ceremony at Palazzo Estense, the two entrepreneurs thanked “our wives, who have always let us concentrate on the company,” and also “our 7 children, who, today, are keeping Elmec going.” A thought was also given to the many employees, who, in these 40 years, have worked with “great professionalism and affection for the job.”

The ceremony also provided an opportunity to give other awards and acknowledgements. The Bosina family wanted to give a plaque to the Mayor, Attilio Fontana, on the eve of his tenth anniversary as Mayor. “These days are very important for our town,” the Mayor said, “and Varese is showing its best side.” He mentioned such initiatives as the crowded solidarity dinner, on Saturday evening, which was “a representation of a town that we can really be proud of.”

And Varese can also be proud of the other people awarded in the course of the morning: Aldo Steffenini, a member of the Order of Merit for Labour, and descendant of Galileo Ferraris, the man who invented the rotating magnetic field and who revolutionised the electric engine, and Annarosa Gervasini, the owner of the historic grocer’s shop in Piazza Beccaria, in Varese. “I’m very happy and proud,” she said, “because it takes great passion and perseverance for a shop like mine,” which, despite her age, “I’ve kept going, on my own, for 25 years, out of a sense of service, and because of the friendship with the customers.”

After the ceremony, the traditional parade through the streets in the centre of Varese moved the celebration to the San Vittore Basilica, where the torch that had touched every neighbourhood in the town, during the morning, eventually arrived. Here is the video of our live broadcast of the celebration.