Renzi visits three companies in Varese. “We need companies like these.”

The Prime Minister visited three companies in Varese Province, Illva Saronno, TCI and Yamamay, in the company of local and national political leaders. On the referendum, he said, “Either we change, or we will keep the same faces.” 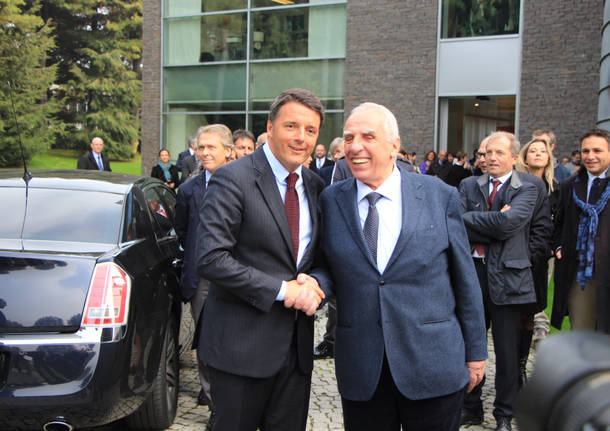 It was a lightening visit to some of the most important companies in the area, by the Prime Minister, Matteo Renzi, on Thursday, 3 November, to Saronno and Gallarate, where he was greeted by both local and national political leaders.

Renzi made a very brief statement to journalists, at the end of his visit to Gallarate, when he was asked (also) about the referendum. “We didn’t speak about it at all with any of the company employees. The point of the referendum is very simple: either we change or we will keep the usual faces and the usual names.” On the possibility of a postponement, Renzi responded with, “Oh Please!” and a smile.

Renzi first visited Illva, in Saronno (the historic company which produces the well-known “DiSaronno”), meeting its owner Augusto Reina. Greeted by the Mayor, Alessandro Fagioli, who was also wearing the Italian sash, the Prime Minister was accompanied also by the Democratic Party’s Regional Secretary, Alessandro Alfieri, and Provincial Secretary, Samuele Astuti, and by the MPs Daniele Marantelli, Maria Chiara Gadda and Angelo Senaldi. The visit then moved on to TCI (the telecommunications company owned by the entrepreneur Gianfranco Librandi, who is also an MP for “Civics and Innovators”). The Prime Minister was welcomed by Librandi himself, joined by the Forza Italia Euro MP, Lara Comi. There were also other mayors from the local area, including Davide Galimberti, of Varese, and Lorenzo Guzzetti, of Uboldo. The Varese tour then went on to Yamamay, in Gallarate, where Renzi was received by Luciano Cimmino and Francesco Pinto, and also met the Mayor, Andrea Cassani (who also gave the Prime Minister a letter) and a group of young DP councillors, including Anna Zambon (Gallarate) and Stefano Dozio (Cardano al Campo).

“It’s been a lovely tour,” said Renzi, at the end. “These companies are situated in a very important province. On the day when the Italian Statistics Institute has claimed that the number of jobs had increased by 656,000, I’m particularly glad to see companies that are hiring, despite the many difficulties we have to face, that we aren’t hiding from; we need companies like these.”

“With today’s visit, Prime Minister Renzi, who also visited Augusta Westland last year, wanted to bring the attention of the entire government back to the needs of our province,” a satisfied Samuele Astuti explained. “More generally, the government has invested greatly in innovation in industry. Indeed, Minister Calenda recently presented the National Industrial Plan 4.0, which is a great opportunity for the entire production system, and which involves many organisations; universities and cultural agencies, businesses and the Public Administration must be the real protagonists of this industrial revolution. Prime Minister Renzi wanted to thank the companies that are bringing the quality of Italian intelligence to the world. He also repeated a very important fact: the increase in the number of jobs in Italy, 656,000 since February 2014, which has been possible thanks to the entrepreneurs who believe and invest, and the employees who follow their plans with enthusiasm, pride, professionalism and tenacity.”

“The attention of the country and of the government is on this area,” Varese’s Mayor Galimberti added. “These are decisive years for our province, because, thanks to the synergy between the best aspects, universities, councils and government, we really can win every challenge before us and lift up the province and the town of Varese. This area has always expressed entrepreneurial excellence, and today, it’s time to become a virtuous province again, also thanks to our important manufacturing industry.”