A plume of smoke coming out of the company Holcim: “It’s only condensation”

There were a number of reports of smoke that could be seen from miles away. We asked the company for an explanation, and the reply we got was the same as a year ago. 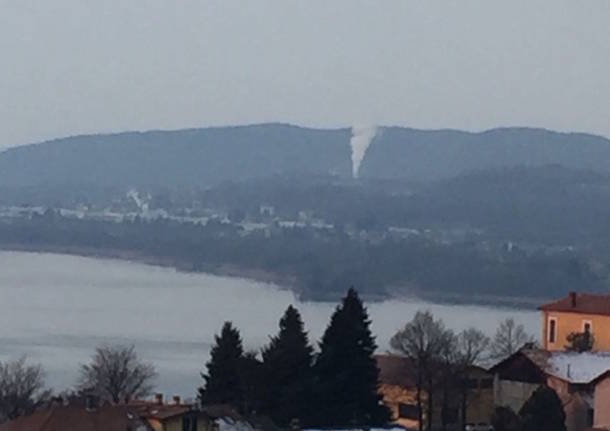 A plume of smoke that, for days, could be seen from miles away.
This is what has been coming out of Holcim, the cement works in Comabbio/Ternate; a number of readers reported it to us, with photographs that come from the other side of Lake Varese, from Barasso.

We asked the company for an explanation and the reply we got, which was the same as the one they gave us about a year ago, was as follows.

«In meticulous compliance with the regulations of the Integrated Environmental Authorisation, in the manufacturing unit in Comabbio, we continuously measure the chimney emissions, using a double checking system.

During winter months, the unusual weather conditions, with temperatures that remain near 0°C, even during the day, have an impact on the visibility of the plume.

Indeed, the condensation forms several metres above the chimney, where the humidity comes into contact with cold air. The colour varies depending on the position with respect to the sun, on the position of the observer and on the colour of the sky. Having said that, as always, the emissions over the last few days are entirely within authorised limits.

On this point, specific and careful monitoring is primarily carried out respecting the environment and the people in the local community, in our own interest and in that of the employees, who, to a large extent, are resident in the neighbouring towns, in accordance with the global strategy of LafargeHolcim, which seeks to create value in accordance with the principles of sustainable development. Furthermore, as a pilot plant in the cement sector in Lombardy, data is continuously sent, in real time, to the appropriate authority, through a protected Internet channel that cannot be modified.

In this framework of careful checks, we repeat that the plume is a phenomenon that occurs during the winter, with the same physical and chemical characteristics of the smoke. It is a condensate caused by:

As always, the company is willing to explain in detail and clearly illustrate the manufacturing process and the emission data, which is publicly available for consultation».