The “Teatro Sociale” of Luino was filled with people who listened to Dacia Maraini, the great writer awarded with “Il Chiara alla carriera.” 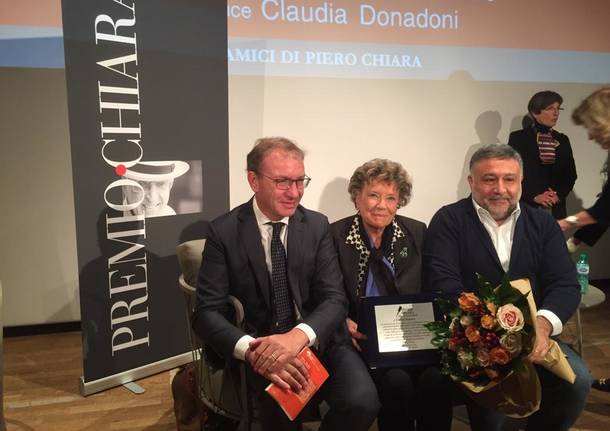 The “Teatro Sociale” of Luino  was filled with people who listened to Dacia Maraini, the great writer awarded with “Il Chiara alla carriera.”

The conversation, which preceded and accompanied the award ceremony, was held on stage by Claudia Donadoni, in the guise of presenter and Mariagrazia Rabiolo, journalist and TV producer of cultural news programmes of RSI Rete Due, in the guise of interviewer.

FROM VIOLENCE AGAINST WOMEN TO THE RELATIONSHIP WITH MORAVIA: AN HOUR OF ALL-ROUND INTERVIEW WITH THE GREAT WRITER

A short meeting (an hour in total, including the award ceremony) but intense especially in the topics from violence against women to her relationship with Alberto Moravia, her partner for many years, and Pierpaolo Pasolini “sweet travel companion” in the longest trips such as in Africa. Great men of letters who surrounded her, but did not represent her education: “Moravia and Pasolini influenced nothing, you could say, about my style: when I met them my way of writing was already well defined,” Maraini explained to the interviewer, “but they certainly taught me a lot from the point of view of intellectual honesty and especially of social commitment. They both strongly believed that a writer should intervene in the face of injustice, not with absolute truths or even novels, but simply by expressing his opinions”. Killing someone who annoyed us has come to mind to everyone but culture and education prevent it.” A culture which is animated and trained only by “Reading, Reading, Reading”, a sentence she expressed in the interview. She also recalled Romano Oldrini, President-in-Office of the association “Amici di Piero Chiara”.

Eventually, the career award was presented to her, with applause from the public, by the sponsor Rosario Rasizza, owner of Openjob Metis, who underlined how “This is a prize for the great work of a person, and we like to be in a place where work and professionalism are rewarded” and by the mayor of Luino, Andrea Pellicini: who started the tradition of rewarding the Chiara for a career in Chiara’s city of residence, and “for almost ten years now, we have been happy to welcome guests in this moment”.

The prize was awarded for the following reason: “Characterized by a strong intellectual consistency and great attention to the world of women, in over fifty years of career, she has been able to successfully range from fiction to theater, from poetry to non-fiction to journalism. In every one of her publications, she has been able to speak to the widest public, always presenting topics of great relevance, in a unmistakable style thanks to its clarity and incisiveness”.