The restoration projects, with a total price of 65,000 euros, will be financed by a notice of Regione Lombardia, and, through a digital crowdfunding, which is open to everyone: “If you love this place, help us to preserve it” 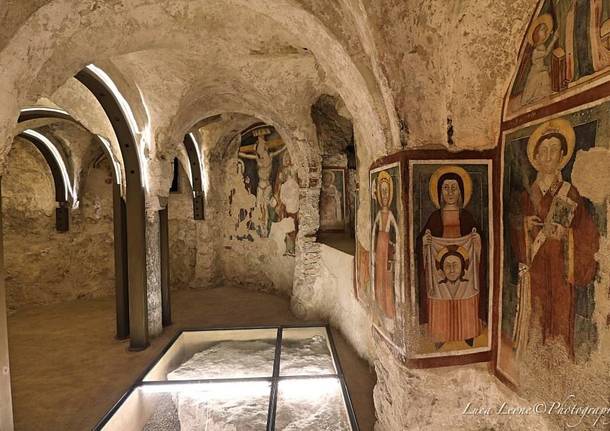 Sacro Monte starts a “construction site” in the heart of two of its most important exhibits: the crypt of the Santuario, a place more ancient than the rest of the religious compound, and the model of the door of the Duomo of Milan that is kept in the house museum Lodovico Pogliaghi.

The restoration projects, with a total price of 65,000 euros, financed for the 50% by a notice of Regione Lombardia and for the remaining part by fundraising and digital crowdfunding activities on the platform Produzioni dal basso, were presented by the Parrocchia of Santa Maria del Monte and by the Veneranda Biblioteca Ambrosiana of Milan to the Camera di Commercio of Varese.

The crypt is the core of the cult and of the history of Santa Maria del Monte, has been open to the public for very few years, and still contains a series of mysteries about the super-old past of Sacro Monte.

Between 2013 and 2015 the crypt itself was the subject of some archaeological investigations that brought yet unknown elements of its history back into the world. Three graves in particular were discovered in the access corridor of the crypt, which started unprecedented assumptions about all the site.

The press conference for the presentation.

The first project is right about the extension of the digs and of the studies about the historic and artistic heritage of the crypt and of the Santuario.

At the same time, will start an important intervention to restore and preserve the model of the plastered door of the Milan Cathedral realized by Lodovico Pogliaghi and conserved life-size right in his house-museum.

The house-museum, open to the public since 2014 and managed by the Archelogistics society, is owned by Veneranda Biblioteca Ambrosiana of Milan and is one of the sites that is creating interest among the visitors of Sacro Monte. It is located almost at the end of the Sacred route, just before reaching the real village, and it is the only site in the world that has piece of art made and collected by the artist Lodovico Pogliaghi.

The model of the door of the Cathedral

In the house, among the archeologic exhibits, Egyptian sarcophagus, pieces of Eastern art, statues, vases, carpets and the mass of “treasures” collected by Pogliaghi, there is also the model (that became reality) of the door of the Milan Cathedral.

But, over the years, the door has fallen apart and now, it needs a deep restoration action. The presented project will do it through an intervention to make safe, reinforce, clean up and fix the entire work.

Both the sites will have also a “touristic” and educational feature. Extra openings will be done in order to guarantee the presence of visitors to let them know the projects and the historical news that will come to light.

It will be possible giving support to the projects through a crowdfunding opened to everyone on the platform “Produzioni dal Basso”, and it will be available starting from Monday 3th December.