The première of “Digitalife”: great applause for the film that speaks about twenty years of digital technology

The film, which was produced by Varese Web together with Rai Cinema and the Fondazione Ente dello Spettacolo, was premièred yesterday evening at Ville Ponti, as part of the Glocal Festival. 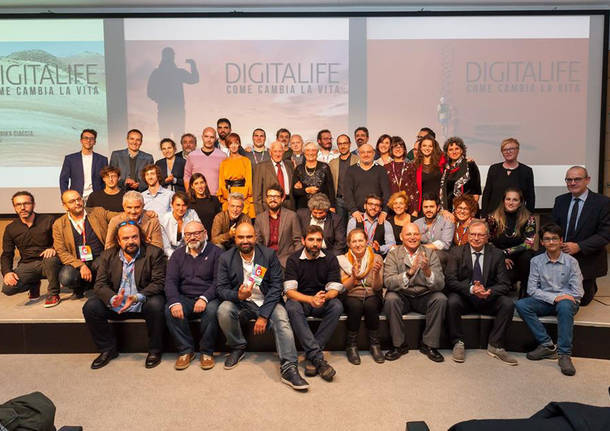 The audience gave an excellent reception to Digitalife, a film that speaks about the twenty years of the digital world, and about how the Internet and the new tools for connecting people have changed our lives.

The film, which was produced by Varese Web together with Rai Cinema and the Fondazione Ente dello Spettacolo, was premièred yesterday evening at Ville Ponti, as part of the Glocal Festival.

More than 400 people in the hall applauded the film, which was introduced by Marco Giovanelli, the editor of VareseNews. “We wanted to create something special for the 20th anniversary of VareseNews, but we wanted to avoid anything that was self-congratulatory, that recounted the story of the newspaper. So we decided to talk about what lies at the heart of our work, something that, in recent years, has produced an extraordinary change: the advent of digital technology and its increasingly significant presence in our society and in the lives of all of us.”

Directed by Francesco G. Raganato, the director and author of numerous documentaries and television programs, Digitalife is a choral effort that gave well-known and unknown people the task of describing how digital technology has changed their lives, and how it has become a tool that gives shape to projects; others spoke about themselves and their dreams.

Digitalife weaves together painful stories and moments of rebirth, challenges that seemed impossible and crazy ideas, beautiful projects and radical changes that came about thanks to digital technology.

The evening, which began with a greeting by the Lombardy Region President, Attilio Fontana, was attended by almost all of those who appeared in the film, who at the end, magically “came out” of the screen for a group photo with the editorial staff of VareseNews.

In January, the film will face the challenge of the cinemas, but the Digitalife project continues. Follow it on the website and on the dedicated Facebook page.