Campo dei Fiori: funds for the recovery after the fire have been identified

The Regional Council has approved the agenda to find the funds to invest in making the mountain affected by a fire in October 2017 safe, and in reforestation. 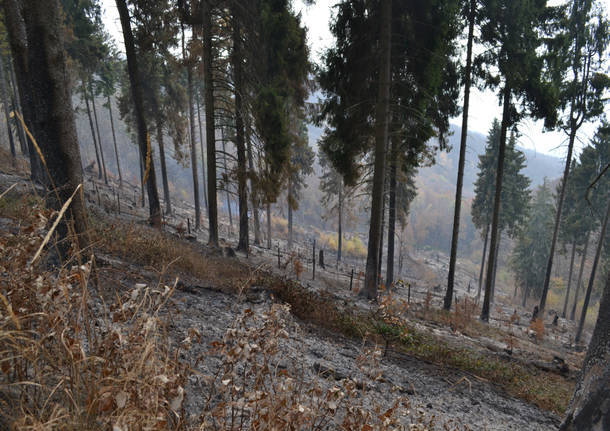 “Today, in the Regional Council, we’ve achieved something good. Thanks to the good intentions and willingness of all of the seven regional councillors elected in Varese Province, the way to find the resources necessary to make safe and relaunch Campo dei Fiori, which was affected by the terrible fire in October 2017, has been found. We can really say that unity is strength.” This is what was said by Angelo Palumbo, the Forza Italia regional councillor and Chairperson of the Territory and Infrastructure Commission, who promoted the agenda, which was approved today by the Regional Council. The agenda, titled “Regional contributions for the work of making Campo dei Fiori safe, and reforestation”, was also signed by the other six regional councillors: Samuele Astuti, Roberto Cenci, Francesca Brianza, Marco Colombo, Emanuele Monti and Giacomo Cosentino.

NO MORE GENERAL REQUESTS, NOW THE COUNCIL IS PAYING OUT THE SUMS – The measure, which was passed unanimously, identifies clearly (thanks also to the collaboration of the Council departments and, in particular, to Fabio Rolfi, the Councillor for Agriculture and his collaborators) where to find the resources for Campo dei Fiori, in the compensatory interventions, after the authorisation was issued for transforming the forest.

“The council has formally agreed to pay these amounts. We avoided the classic general formulas with which the Council usually ‘invites’ the offices, without defining precise obligations. For our Campo dei Fiori, we asked for and obtained formal guarantees,” Palumbo explained. “Lombardy Region is in fact collecting significant resources from the areas that will undergo compensatory measures, which, in accordance with Law No. 31, of 2008, are required to carry out improvement and prevention measures and to restore the existing woods. And this is precisely the path chosen for our mountain.”

OBJECTIVE: THE RELAUNCH OF CAMPO DEI FIORI – The resources that have been identified are being allocated to improve the forest, by cutting down dead or compromised trees, by reforestation, fire prevention activities such as firebreaks, forest and hydraulic reorganisation, and adapting the forest road network.

“LET’S KEEP OUR COMMITMENTS TO THE TERRITORIES” – “During the training of the Woodland Fire teams, on Campo dei Fiori last June, we made a commitment with the territories and the volunteers, to keep a close eye on the needs and on the future of the mountain after the fire. And this is what we’ve done.” Palumbo continued, “Indeed, last November, at my request, we had heard representatives of the authorities in Varese, Barasso, Luvinate and of the Park Authorities, at the Agriculture, Mountain, Forests and Parks Commission of the Regional Council, in order to take stock of the state of health of the mountain, which, as we know, was affected, during the summer, by significant flooding caused by the passing of the fire. And we were all really struck and worried by the vulnerability of the woodland and by the associated danger to the inhabitants, with the risk of considerable damage to the residential areas and to the infrastructure lower down. It was then that we made a clear commitment, with all Varese councillors, to give a clear and precise signal.”

LOMBARDY REGION AT WORK. A UNITED TERRITORY MAKES ALL THE DIFFERENCE – Already in December 2017, the Regional Council voted through the first agenda, which asked the Council to support municipalities in identifying the resources necessary to face the critical situations that had arisen after the fire. And in June 2018, the Council provided the first significant sums, of approximately €750,000 for the territories of Barasso and Luvinate, for the initial interventions against the hydrogeological danger. “Now we are focusing on the remaining sums, of just over €2,000,000. Certainly, the solidarity demonstrated by Varese politics and by its representatives will be a virtuous and winning approach, also for the future,” Palumbo concluded.