The trails of the Frecce Tricolori are made in Varese

Not only the aeroplanes (MB339 PAN) but also the system that generates the red, white and green-coloured smoke, are the result of the work of a historic factory in Somma. 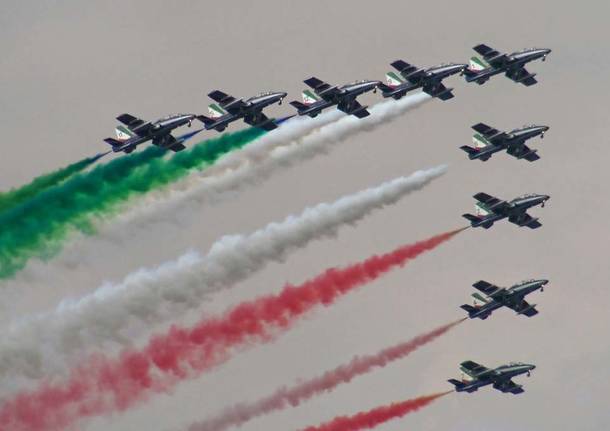 When you see the figures drawn in the sky by the Italian Air Force’s aerobatics demonstration team, the Frecce Tricolori, you should know it is, in part, thanks to Varese industry. Not only the airplanes, but also the trails of coloured smoke cutting through the sky.

It is well-known that the aeroplanes used by the Frecce Tricolori (the Aermacchi MB339), are built in Varese Province, but it is less known that the system that generates the coloured smoke is also made by a local company, Secondo Mona, which was founded in Somma Lombardo in 1903, and which has been working in the aeronautical field since 1913.

The company already supplied Aermacchi (now called Leonardo) with components for the MB339, the trainer aircraft that was chosen, at the beginning of the 1980s, for the Frecce Tricolori, who had previously been using the Fiat G91 (one example now stands as a monument in Gallarate, in Viale Milano).

“When the Aermacchi MB339 PAN was chosen for the Frecce Tricolori, Secondo Mona where asked to add a fuel system with a dedicated section for generating smoke,” explained Claudia Mona, the CEO of the company.

In comparison with other acrobatic teams, the Frecce Tricolori had and still have specific demands, in terms of the number of aeroplanes involved, of the complexity of the acrobatic figures, and of the duration of the “puffs of smoke” required by the aeroplanes.

How does the system work? It basically pumps a liquid dye “into the engine exhaust and this generates the coloured smoke trails,” explained the engineer Ermanno Fossa, Secondo Mona’s technical and business development director. Originally, the system used Vaseline to make the white colour and dyes for the red and green. “These were very viscous substances, and this is why particular systems were needed to stop the valves from blocking, so Secondo Mono used innovative solutions in which the components were ‘washed’ by passing air.”

These very specific requirements were partly satisfied by subsequent evolutions in technology. “Today, we use liquids that have less impact on the components and also on the environment,” Fossa said. “Dyes similar to those used in ordinary motor vehicle fuels are used.” The aeroplane has remained the same since 1982; it is the MB339 PAN, where “PAN” stands for Pattuglia Acrobatica Nazionale (Italian Aerobatics Team), the official name of the Frecce Tricolori.

Do other aerobatics teams use smoke systems that are “made in Somma”? The aeronautical components are not “standardised”; each piece is specifically designed for a particular kind of airplane. However, Secondo Mono also produce a smoke system for the T-50 jet of the aerobatics team of South Korea.