From Switzerland to the tomb of St. Augustine: the Via Francisca has its “Testimonium”

The document certifying the completion of the journey will be issued at the Basilica of San Pietro in Ciel d'Oro. This is the experience of the project to develop the Via, the star at Glocal 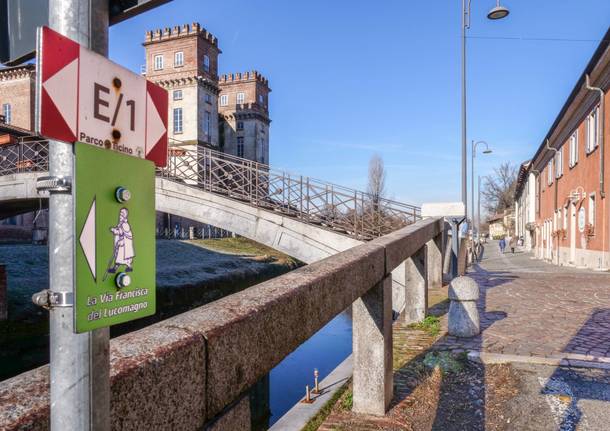 You cross the border with Switzerland on Lake Lugano, and from there, in Laveno Ponte Tresa, you set off for Pavia. These are the 135 km of the Via Francisca del Lucomagno, for which a completion “seal” has also been prepared: the Testimonium, a document that certifies the completion of the journey, will be issued at the Basilica of San Pietro in Ciel d’Oro.

The tomb of St. Augustine is the end point of this historical way, which is drawing more and more pilgrims. “This year alone, we’ve had more than 700 people. The goal is to make the Via Francisca del Lucomagno an important part of the network of historical ways in Italy and Europe,” said Ferruccio Maruca, the secretary of the Coordination Group for the project to develop the Via, in collaboration with Lombardy Region and with Varese Province, Milan, Pavia and all the municipalities involved along the route, and with the support of the European Regional Development Fund of Lombardy Region – POR FESR 2014-2020.

“The Testimonium is a historically very important element because it traditionally enabled pilgrims to demonstrate, on their return home, that they had made the pilgrimage and thus fulfilled their vow. Today, it is the completion seal of a path that walkers undertake for the most varied of reasons. The walk may be a physical test, it may be a spiritual journey, but also a cultural and environmental experience, as well as one of getting to know places and people. It is having a starting point and moving towards a destination, walking along a path surrounding yourself in its history and traditions.”

In the project to develop the Via Francisca, nine private companies and 50 institutions have joined together to make the 135 km of the walk accessible. “It is not only a question of mapping and accurately indicating the entire route, but also of activating services so that the Via can be used by pilgrims,” Maruca continued. This means “setting up reception facilities that, at controlled prices, can accommodate those who have the credentials. The reception, however, must be seen in broad terms, so that the whole territory, united by the Via Francisca, is open to the pilgrims.”

There are three fundamental elements in making a historical way accessible. “The route, which has been completed with the project of developing the Via,” he added. “The welcome, which we are working on, to increasingly expand the network; the communication, digital communication on the website www.laviafrancisca.org, and the pages on Facebook and Instagram, and more traditional communication, with the guide which will be presented next March, at the trade fair ‘Fá la cosa giusta’ (Do the right thing).”

Maruca is bringing the experience of the project to develop the Via Francisca del Lucomagno to Glocal, the digital journalism festival. The representative of the project will be taking part in the meeting “How to talk about cycle paths and metropolitan paths in the digital age” scheduled for Thursday, 7 November, in Varese (from 4 p.m. to 6 p.m., in the Varesevive Hall, in Via San Francesco d’Assisi 26) alongside Paolo Pileri, a lecturer at the Polytechnic of Milan, and creator of Vento, the cycle path that connects Venice to Turin, Gianni Biondillo, the writer and creator of Sentieri Metropolitani, Alberto Pugnetti of Radio Francigena and Miriam Giovanzana of Terre di Mezzo, with the coordination of Marco Giovannelli, the director of Glocal and President of ANSO (the National Online Press Association).

The meeting is valid for obtaining the obligatory training credits required for members of the Order of Journalists. For further information: www.festivalglocal.it