The new skiing season begins, looking to the 2026 Olympics

Various initiatives have been scheduled, to make the slopes of Lombardy and its trails increasingly attractive and functional, also in preparation for the big event 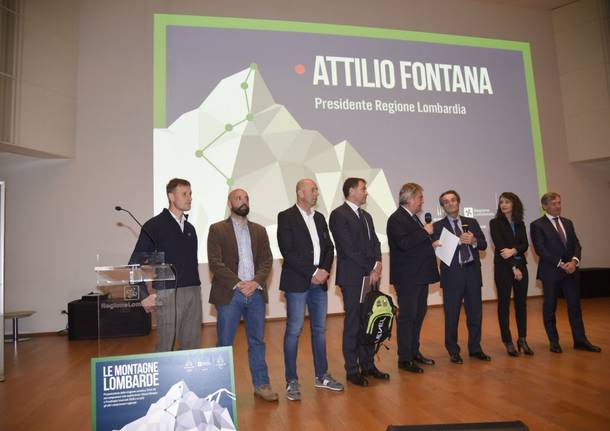 The curtain has officially been raised on the 2026 Olympic and Paralympic Winter Games, with an important challenge: “to make the mountains of Lombardy the top mountains in Italy, the best in the world.” These are the words of Lombardy Regional Councillor for Sport and Young people, Martina Cambiaghi, who spoke in the Testori Auditorium, where, this morning (Thursday 14 November), the world of winter sport had gathered.

The occasion was for the presentation of the new, 2019-2020 skiing season, involving the very regional skiing areas that, in seven years’ time, will be hosting the world’s biggest skiing event. The goal is to be ready for that occasion, from all points of view, and these years will provide a testing ground to perfect the organisation. “We can make this big dream come true; the path has been drawn, but we need the collaboration of everyone,” the Councillor added.

Support has also come from Antonio Rossi, the Undersecretary for Major Sporting Events, who greeted the large audience, saying. “Good luck for the whole season; we’re working on a big dream, the Olympics. I think this is a great opportunity to grow the sporting culture and our mountains. We must seize it, and the testing ground will be also the Deaflympics and the World cup in Bormio, two major events that will take us to 2026.”

Flavio Roda, the President of the Italian Winter Sports Federation, is of the same opinion. He explained, “We want to make this territory grow, and these years will be important, as they’ll require a big commitment in all local skiing areas. We need to work as one, with everyone involved: from the more technical aspects, the roads, for example, to the athletes, the 2026 Winter Olympic Games will be our opportunity, and we have to be ready for them.”

In the meantime, work is already underway, and in the last year, several actions have been taken to make the mountain a more attractive and liveable place and to attract as many people as possible. Among the most important are the allocation, in 2019 alone, of €9.4 million with the tender “48h scheduled snow”, to increase the artificial snowfall, and the tender “Snowfall 2019”, for the management costs of resorts, which will reach almost €20 million.

“In Lombardy, we have 900 km of ski slopes, 310 lifts, 27 ski resorts. These are important numbers and we want to continue to increase the number of users in all areas. Beside Lombardy Region, we’ve been able to innovate and bring new initiatives, such as the PayperUse for ski passes and open days, and initiatives such as “Scialla”, the free ski pass for children under the age of 16 (an initiative which is being repeated on 15, 16 and 21, and 22 December). The mountains of Lombardy must all grow, from Varese to Brescia,” explained Massimo Fossati, the President of ANEF Ski in Lombardy.

Those who experience the mountains and help others to experience them, namely, the ski instructors and their schools, will have a fundamental role in this. “Today there are 2743 ski instructors for all disciplines, who play an important role, because they are the first tour operators for those who come to experience the mountains. We will do our utmost to collaborate with everyone, and make sure that everything works in the best possible way. This year, we’ve received €50,000 in funding, and this money is important, because it will allow us to expand our open day offer and introduce new people to skiing,” explained Cristina Pedretti, the President of the Regional College of Ski Instructors.

“There are going to be new suits for ski instructors; they’ll have recognisable colours for the Lombardy Region, and we think this is an important promotional tool for the territory,” Luciano Stampa, the President of AMSI Lombardia, said.

And the mountain guides will also be fundamental in this regard; their activities were presented by Davide Fiorelli, the President of the technical Committee for the Regional Association of Mountain Guides.

Beside the mountain holidays, there are the roads, which should become more sustainable, practical and convenient. This is why Leonardo Cesarini, the Marketing Director of Trenord, presented the package for those who want to reach the mountains by train.

“We started thinking about the mountains a few years ago and we created package deals specifically aimed at those people that want to go skiing by train. These package deals allow the people who use them to reach the slopes in a more convenient, sustainable and comfortable way, and they include the journey by train, the shuttle bus and the ski pass. It’s been used by 2000 people so far; 1/3 of whom were foreigners, 80% were from Milan and 30% were long-term customers.”

Lastly, the “Sporty” app, which has been developed by Lombardy Region, was presented. It consists of a virtual assistant designed for scheduling sporting activities in the mountains: within it, all of the summer and winter disciplines, both indoors and out, are gathered, as are the activities and events. It is a way to stay constantly up-to-date.