A bridge built in a week: the group, Genieri di Lombardia, “rescues” the isolated village

The Civil Protection group, which is one of a kind in Italy, builds Bailey bridges, which were developed for military use; in this case, the temporary bridge was needed to get over the road block that had been caused by a landslide 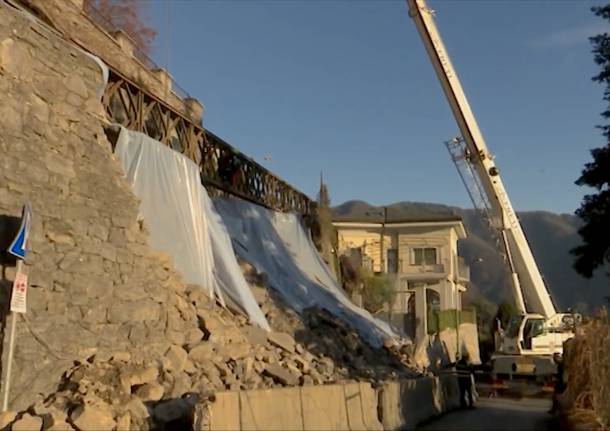 Inspections and plans were made over a few days, then construction began, and after a week, the temporary bridge was ready.

This great challenge was carried out by the Genieri di Lombardia, a special group that is part of the Civil Protection, that is one of a kind in Italy (if not in Europe), that is based in San Macario, near Samarate.

The Genieri di Lombardia, who are led by Iuri Valter De Tomasi, intervened to “rescue” Rovenna (near Cernobbio) from its isolation: the service road had collapsed on 21 November, just above the centre of Cernobbio, and so, it was necessary to build a temporary bridge to get over the road block.

The job was entrusted to the Genieri of Samarate, who, last Saturday, started to bring in the various components. This bridge is a Bailey bridge, which was developed for military use; it is a sort of huge Meccano that is very flexible in terms of its size (also bridges tens of metres in length can be built).

A phase of preparation of the truss to be launched to get over the road block.

Now that the bridge has been launched, all that remains is to complete the roadway. Matteo Monti, the Mayor of Cernobbio, explained the schedule to EspansioneTv.

“We’re continuing the work on Monday, and then, testing will start. I’d like to reopen the connection with Rovenna within a fortnight of the landslide, so we plan to restore the passage on Wednesday or Thursday.”