Castiglione Olona produces one of the best panettones in the world

Attilio Pavin, from the "L'angolo del pane" bakery, has been awarded third place in the international competition organised by the Italian Federation of Bakers 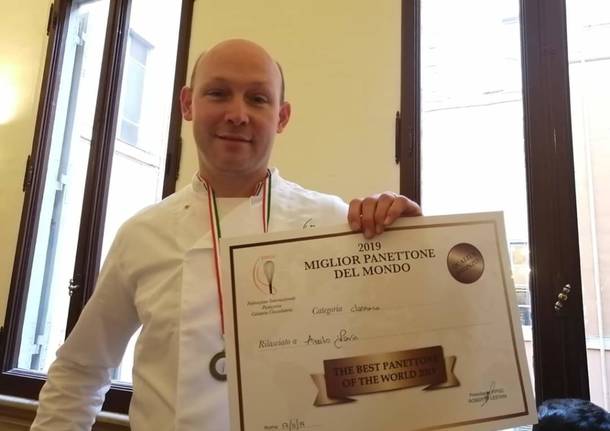 Attilio Pavin returned to Castiglione Olona with his bronze medal around his neck, but the following day, he already had his hands in the flour, kneading dough and baking the loaves for his customers. Last weekend, Pavin, 42, from the “L’angolo del pane” bakery, was awarded third place in the international competition organised by the Italian Federation of Bakers, in Rome.

It was a great joy, which Pavin recounts with enthusiasm. “There were three different categories to compete in: decorated, filled or classic panettone, which is the one I chose. We were all enthusiastic about having the chance to meet fellow bakers and pastry chefs from all over Italy. And not only; the competition was open to the best international pastry chefs and the 165 contestants included Spaniards, Saudi Arabians and even one from China, who was awarded for coming to grips with a product that is so typical of Italian tradition.”

But his greatest satisfaction came from his customers, who, upon his return, greeted him enthusiastically. “Thanks to social media, the news of my success reached Castiglione Olona well before my return,” Pavin said, “and it’s been a pleasure to read the congratulations from the whole village. It gave me even more satisfaction, on Monday, to welcome the customers to my shop; between one compliment and another, they asked me, ‘Now that you’re famous, you’re not going to raise the price of the panettones, are you?’ I’m the same as I was, and after this experience, I came back to the job I’ve always had, in the bakery that my family and I run, with the passion I’ve always had.”

Pavin’s enthusiasm is palpable, even when he talks about his day, which begins when it is still night outside. “I wake up every day at a quarter to 4 in the morning, but it’s not a burden; it’s lovely to think, in my job, that from such a simple ingredient like a bag of flour, you can create such tasty things.”

Pavin gives particular importance to what he does. “One phrase above all encapsulates my view of what I do: ‘Bread is the stuff of life’. We should all understand the importance of preventing food waste; I try, in my own way, to contribute, by donating left-over bread to the nuns, and by participating every year in ‘Pane in piazza’ in Milan, a fair-trade festival, whose proceeds are donated to construct ovens in Africa.”

Before ending the interview, we asked Pavin the secret behind his Panettone, which tastes so good that he won this prestigious award. Pavin had no doubt. “It’s all the love I put into the dough and the high-quality ingredients I select, of course; I always try to choose organic and locally-sourced products, because the raw materials are the key!”