A new baby is born at the Cornelle Park; it is a pink flamingo

The egg hatched a few days ago, and from 15 to 20 of April, there will be a competition, that is open to everyone, to choose a name for the chick 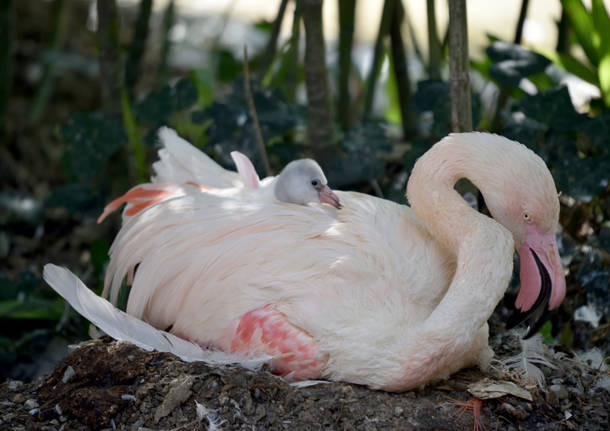 There is a new birth ribbon at the Cornelle Wildlife Park: we still cannot discover whether it is pink or blue, but the pink flamingo chick, which was born about ten days ago, is already a symbol of hope and rebirth for all of us who are living through this unusual time. 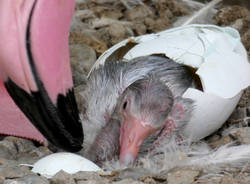 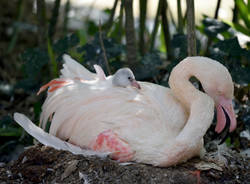 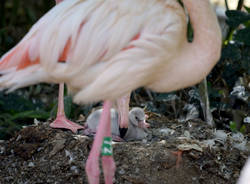 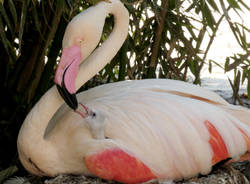 And we can all get involved in choosing its name, but taking part in a competition on the Park’s Facebook page, which will be active from tomorrow, Wednesday 15, until Sunday 19 April 2020.

One year after the last birth in the area, the latest to be born to the “Phoenicopterus roseus” household successfully passed its incubation phase, about a month ago, which went from the time the egg was laid to when it hatched, and the initial period of its life, which is essential for discovering any critical issues in good time, and for regular checks by vets at the Cornelle Wildlife Park, to monitor the state of health. The chick has a greyish down, because the typical pink colouring is due to the red/orange pigments, called carotenoids, contained in large quantities in the algae and small animals that these birds feed on; the pink colouring will appear when the bird reaches maturity. In the first months of its life, the flamingo will be fed with crop milk from an adult, and then – like all others – will move on to small aquatic animals, shrimp and algae. The parents continue to feed their young for up to a year.

These magnificent animals, which come primarily from Africa, southern Europe and northern India, are wading birds and are greatly loved by small children because of this characteristic, as well as the bright colouring of their feathers. They are social animals that move in large flocks and live in shallow waters and marshy areas. Two characteristics that make these animals unique, are their long necks and their strange beaks, which allow them to feed in shallow waters by sieving the water to catch the small animals contained in it. In the Park, they are primarily fed with specific shrimp-based foods.

However, the Cornelle Park is home to 75 pink flamingos and other species of flamingo, including the Chilean and the lesser flamingos. The oldest flamingo is of the Chilean variety, and is over 40 years old. Despite its venerable age, it is in excellent health!

The competition being organised by the Cornelle Park to give a name to the chick will last 5 days (from Wednesday 15 April, to Sunday 19 April 2020) on the Park’s Facebook page. Anyone can participate to choose the name of the little flamingo, by leaving a comment under the post that contains it. We still do not know its sex, but we’re going ahead, all the same. In your comment, you can indicate both a male and a female name (only the names entered as a comment to a post will be considered). The staff at the park will choose three male names and three female names from those suggested and fans will be able to vote for the one they prefer. The winner will receive a free admission ticket that can be used by the end of the 2021 season.