“Stories on the grass”, new vintage photos for the virtual exhibition of Villa Bernasconi 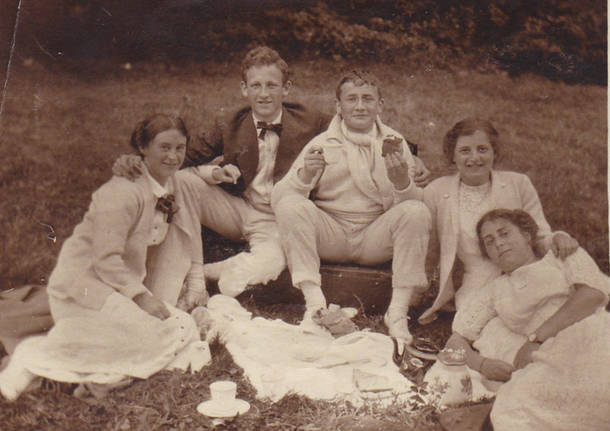 Following the great success and interest aroused among visitors, since its virtual opening, on 3 April, the exhibition “Stories on the grass. Picnic photographs and stories at the end of the nineteenth – beginning of the twentieth century”, at the Museum of Villa Bernasconi, in Cernobbio, near Como, is extending the exhibition until 14 May, with a weekly update. 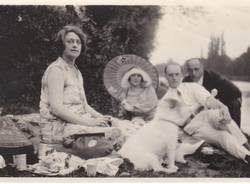 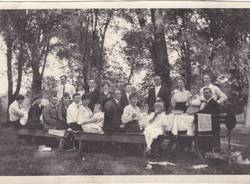 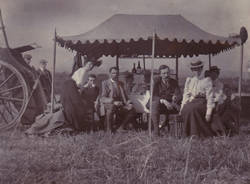 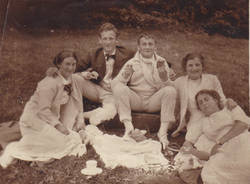 And so, there will be 40 photographs on the website www.villabernasconi.eu, which will remain online over the coming months.

The exhibition, which was organised by Elena Franco, presents a series of images chosen from her collection of vintage photographs, taken at the end of the nineteenth – beginning of the twentieth century. In addition to showing how customs changed, the photographs, which are anonymous and show picnics, are from Europe and the United States, and were chosen from those most representative of Villa Bernasconi’s period of greatest beauty (the Belle Époque), portray a new way of eating food, in an informal atmosphere, surrounded by nature.

To accompany the photographs, the curator has collected stories and tales (there will be about 20) that were sent to her by virtual visitors, who had been intrigued and prompted by the photographs and what they suggest: themes linked to the emancipation of women in the early 1900s, and intimate stories and events disguised as literary translations of non-existent books.

There is even an original multimedia story that is linked to a mini website, where additional content is available: especially purchased vintage postcards, a drawing, a map found and a melody composed especially. Not to mention useful information for planning a virtual journey today to the place where the photographs were taken, with a link showing modern images on the map. This work combines perfectly with the essence of the Villa Bernasconi Museum: an interactive museum that seeks to encourage visitors to actively participate, share and create.

Villa Bernasconi, the headquarters of the Museum, is one of the rare examples of Art Nouveau architecture on Lake Como, and the only villa in Cernobbio that is open to the public. It was built in 1905-06, on a plan by the architect Alfredo Campanini as a “fashionable home” for the engineer Davide Bernasconi (originally from Milan), who founded the silk-weaving company of the same name, in Cernobbio, at the end of the 19th century.

The Villa Bernasconi Museum, which opened in 2017, is quite original. It is not a museum in the traditional sense of the term, but an experience of suggestions and connections guided by the Twitter feed #vocidivilla, an innovative and interactive journey among multimedia contents, objects and historical documents on loan from museum and private collections, and multisensory experiences.

The museum is the focus of Liberty Tutti, a project developed by Cernobbio town council, in partnership with the Mondovisione Social Cooperative, to create a sustainable management model for Villa Bernasconi that makes the most of the involvement of young people, in terms of creativity and professionalism, and makes use of new technologies.

The concept of the museum is one of a “house that speaks”: it is Villa Bernasconi itself that guides the visitor through the museum, with a first-person account. This is a new concept of a museum that involves the visitor actively and emotionally, placing him at the centre of the narrative, turning him into a “guest”.