Domino transplant at the Polyclinic of Milan: one liver saves two people

A marathon operation lasting 18 hours: a young man with a rare disease receives an organ from a donor and gives his to another patient. 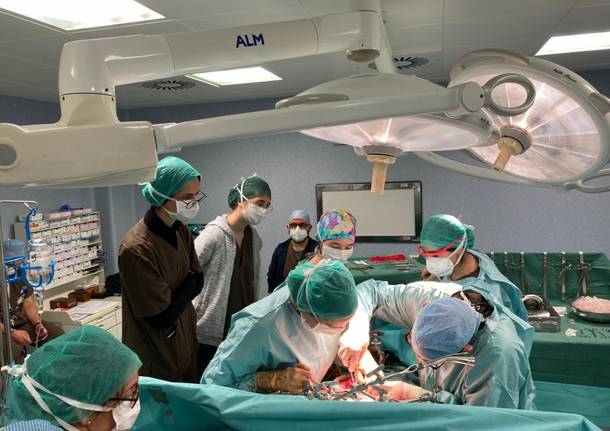 Gianluca has a rare genetic disease that forced him, at only 27, to undergo a liver transplant. And yet, his liver would work perfectly in another person and could save their life. The solution, which is as simple to imagine as it is complex to put into practice, was “domino transplantation“: once a donor had been found for Gianluca, all that was needed was to find another patient that he could donate his organ to, thereby saving two lives with one liver. And that is exactly what happened at the Polyclinic of Milan: Gianluca and Federico (not their real names) have just returned home, and for both of them, a new life can begin, thanks to the generosity that lies behind every transplant.

Gianluca’s disease is called leucinosis; as a result of this, Gianluca complete lacks an enzyme that is essential for metabolising the amino acids consumed with food. Without this enzyme, which is produced by the liver and in the rest of the body, he was forced to follow very strict diets and was constantly exposed to serious complications, such as neurological and respiratory impairment. Because of his leucinosis, Gianluca had always been under the care of Francesca Menni, the contact person for metabolic diseases in High Intensive Care Paediatrics at the Polyclinic of Milan. But in order to recover, he needed a transplant, because replacing his liver would correct the metabolic defect and allow him to return to a normal life. However, Gianluca’s liver was healthy: all that he lacked was the enzyme, and in another patient without leucinosis, this would not cause any problems because his body would produce it without difficulty.

Giorgio Rossi, the Director of General Surgery and Liver Transplantation at the Polyclinic of Milan, and Professor of Surgery at the University of Milan, told us, “The boy was on the list for a transplant, but this meant having to wait for a healthy person to die and become a donor. Gianluca understood that he too could play his part, and he immediately expressed his willingness to become a donor and save someone’s life. This willingness was all the more important as his blood group B is rare and there aren’t many donors like him.”

On 17 March, a compatible liver was found, and the Polyclinic set to work: at 6 a.m., the operating theatres opened, to perform three operations, one after the other: first, Gianluca’s liver was removed, Gianluca was given his new liver, and, at the same time, Gianluca’s liver was transplanted into Federico, another patient on the organ waiting list. Thus, a single donated liver saved two lives.

It took more than 18 hours to complete all of the operations: at 1 a.m., on 18 March, the team coordinated by Professor Rossi completed its surgical marathon. “Everything has gone without a setback, despite the Covid-19 pandemic and all of the complications that come with it,” said Ezio Belleri, the General Manager of the Polyclinic of Milan. “In the operating theatres, more than 40 professionals were involved, with the support of the entire Hospital; it’s impossible to achieve this result without an organisation capable of coordinating several operating units and the regional and national health services. Knowing that Gianluca’s and Federico’s stories have a happy ending is the best thanks for the effort we make every day for our patients.”

In total, in addition to the surgeons led by Giorgio Rossi, it was necessary to coordinate every detail with the Intensive Care Units, Gastroenterology and Hepatology, Radiology, the Central Laboratory, the Health Professions Directorate, the Transfusion Centre and the Rare Diseases Centre of the Polyclinic, as well as with the Lombardy Regional Emergency Service, the National Transplant Operations Centre and the Northern Italy Transplant Coordination Program. This meant involving and organising the work of hundreds of people in a few hours, in perfect harmony.

Today Gianluca and Federico are at home, and once again everything has gone well. But, as we approach the National Day for Organ and Tissue Donation and Transplantation, on 11 April, the experts want to emphasise an important point: without donors, no transplant is possible. For this reason, and for all of the stories that have a happy ending, it is important to spread the message that donating means giving life.