Peru, the origin of one of the biggest fossil deposits of cetacean species in the world discovered

The result of a joint research of the Universities of Milano-Bicocca, Pisa and Camerino, has just been published in PLOS ONE 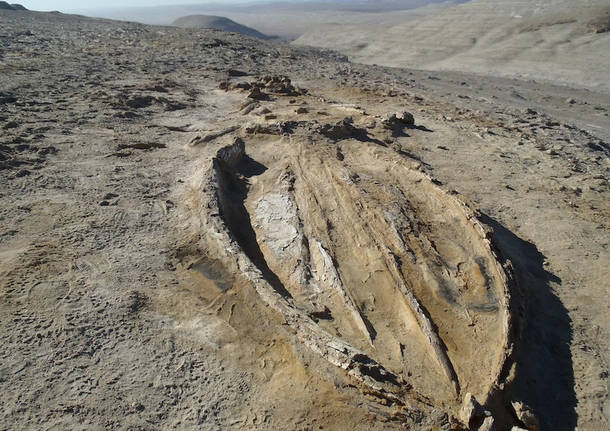 The low concentration of oxygen at the rock bottom, the quick burial of the carcasses and the precipitation of minerals like apatite and dolomite right after the burial of the bones, mixed with the original biological abundance.  These are the conditions that could be the cause of one of the biggest fossil deposits of marine vertebrates in the world.

It’s located in one of the most barren areas of the planet, the Ica Desert in southern Peru, and it is considered an extraordinary deposit because it holds thousands of fossil remains of whales, dolphins, seals, sharks and other fishes, birds and reptiles, which date back to a period of time around 14 to 6 million years ago (an era called “Miocene” by the geologists).

The group of researchers of Milano-Bicocca (Giulia Bosio and Elisa Malinverno), of Camerino (Claudio di Celma) and of Pisa (Giovanni Bianucci, Alberto Collareta, Anna Gioncada and Karen Gariboldi), in collaboration with scholars of various research institutes from abroad, revealed the root causes of this extraordinary paleontological site thanks to the analysis of almost 900 findings, often exceptionally preserved, in an article titled  “Taphonomy of marine vertebrates of the Pisco Formation (Miocene, Peru): Insights into the origin of an outstanding Fossil-Lagerstätte”, which has just been published in the magazine PLOS ONE.

Claudio di Celma, a geologist, said “Where today there is a desert, which extends for hundreds of kilometres along the Peruvian coast, in the past there was a big sea basin, the Pisco basin, characterized by a big abundance of nutrients and a rich biodiversit. The inhabitants of this ancient bay were preserved for thousands of years, and are today displayed in the proximity of Ica thanks to the tectonic uplift and to the current erosion in the desert environment. In addition the lack of  vegetation, which characterizes the area, greatly helps with the discovery of  the remains,” added the paleontologist Elisa Malinverno.

“The study of the distribution of the remains, the associated fauna and the traces left by shark bites on the bones,” says paleontologist Alberto Collareta. “together with that of the rocks in which the fossils are contained, have made the reconstruction of the taphonomic history of these extraordinary remains possible, in other words, what has allowed them to be preserved as fossils from the moment of their death to our day.”

It was indeed a concomitance of different conditions favourable to fossilisation that lead to this extraordinary deposit, as explained by paleontologist Giulia Bosio of the University of Milano-Bicocca, first author of the article: “The low concentration of oxygen at the bottom, the rapid burial of the carcasses and the precipitation of minerals such as apatite and dolomite soon after the bones were buried, in combination with the original biological richness, have allowed the formation of this important deposit, which led to the fossilisation of thousands of specimens.”

Of particular interest is the recognition of some whale skeletons whose distribution and connections with the embedded rocks suggest that the carcasses went through a “self-burial” mechanism. This phenomenon occurs when relatively heavy objects lie on a seabed furrowed by currents; these quickly erode the sediment on which the object lies (in our case, the carcass), causing it to sink into a cavity which is then just as quickly refilled with new sediment. The result of this process – much studied in the case of underwater mines, but never recognised in paleontological contexts – is the rapid phagocytosis carried out by the sediment of a carcass, which is then protected from the action of “sweeping” organisms and many other “disturbing” factors.

The study was carried out, with numerous prospecting and excavation campaigns, by researchers from the Universities of Milano-Bicocca, Pisa and Camerino, coordinated by paleontologist Giovanni Bianucci of the University of Pisa, in collaboration with the Institut Royal des Sciences Naturelles de Belgique (Brussels, Belgium), the Museum of New Zealand Te Papa Tongarewa (Wellington, New Zealand), the University of Otago (Dunedin, New Zealand), the Muséum national d’Histoire naturelle (Paris, France) and the Museo de Historia Natural (Lima, Peru).