“Ludomania: the law is memorable but the government is still absent” 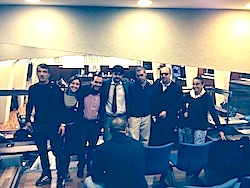 She was there too, seated amongst the public, while the regional law against ludomania was voted for unanimously: “It was a big thrill, but it’s only the beginning, just a starting point.”

We are talking about Daniela Capitanucci, the founder of the AND association, Azzardo e Nuove Dipendenze, Gambling and New Dependencies. Since 1997 she is fighting to control gambling and to expose the dangers incidental to the pathological game. Since her first battles on the eve of the opening of bingo rooms in Italy, the campaign has improved and perfected, as much as the opportunities to gamble have increased and varied.

“In the last years, the dangers incidental to gambling have increased at an exponential rate. Today we’re talking about hundred billion euro a year. The ones that make money out of it are the dealerships and the government that continue to shirk such delicate subjects that concern the citizens, the weakest categories of the community and the youngest.”

The umpteenth slap from Rome just arrived in the last months: “Regione Lombardia sent a proposal of law to the capital, but they didn’t get an answer: neither the Parliament, nor the President of Italy answered. The only guarantee is the additional reduction to the fee provided for the dealerships.”

Despite the anchored pessimism that remains in front of the silence of the government, Daniela Capitanucci applauds the courage of Regione Lombardia: “It was a thrill to see that every council member voted in favour. Not one opposed, not one abstained. It was a thrill to listen to the assessor Beccalossi state “The government doesn’t make money out of the poor in a moment as delicate as this one.” This is a brave law since it goes against big interests. Certainly we will receive complaints, but it’s worthwhile to hang in there, to truly believe in it.”

There is more than one bright side to this regulation: “It’s a law that, if on the one hand it demolishes the system of the game, on the other it builds awareness. It guarantees power to the mayors that can intervene in the region, for example, rewarding the free slot machines owners through IRAP, the regional tax on productive activities. They can impose the minimal distances between the game centres and the “sensitive sites”, force the training of shopkeepers, bestow control and sanction powers to the local police. Everyone has a precise task to conduct to protect those who from gambling become ill and ruin themselves.”

From 2004 until today, the incomes from gambling have increased from 25.6 billion euro to 88.6 in 2012: “It’s a heterogeneous system in which everything contributes to feeding the increase of gambling: the increasing opportunities, the financial crisis, the problems that have to be solved, the advertisements. This phenomenon is too much widespread that I’m still too sceptical about reversing the trend. The silence of the government is worrying, the territories risk to be left alone and abandoned. There will be opportunity to see if this law was successful: the dealerships will certainly complain about the law in Lombardy. We’re waiting to see what the Council of State will say: from their answer we will make plans for the future.”

Meanwhile Daniela Capitanucci and her group of volunteers continue to work, to create awareness, to help those with gambling dependencies and those who want to help other citizens avoid addiction. The network has grown. But this is still not enough.