Produced by Varese Web, with RAI Cinema and the “Ente dello Spettacolo” Foundation, DigitaLife is being screened at 6.30 p.m., in the Assolombarda Gio Ponti Auditorium. 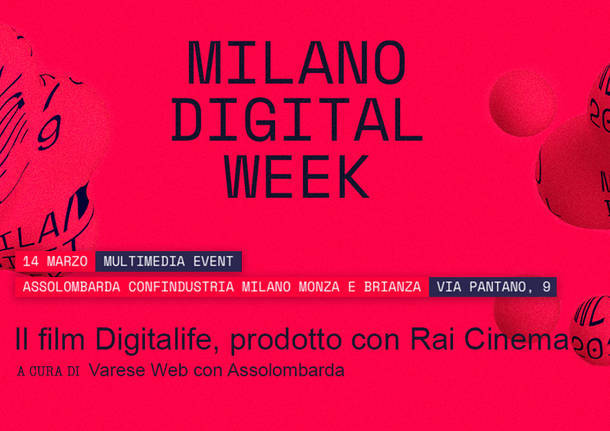 DigitaLife will be the protagonist at Milano Digital Week 2019. On Thursday, 14 March, the film, which was directed by Francesco Raganato and produced by Varese Web, with RAI Cinema and the “Ente dello Spettacolo” Foundation, is coming to the biggest Italian event dedicated to digital technology: the screening (entry is free of charge) is being organised in collaboration with Assolombarda, and is scheduled for 6.30 p.m., in the Assolombarda Gio Ponti Auditorium, the entrance to which is at Via Pantano 9.

For DigitaLife, this is a natural showcase. The film, which brings together 50 different testimonies, came out of the idea to tell the story of how the Internet and digital technology have changed everyday life, creating a sort of mosaic, in which technology is the great protagonist in the change. This topic is dear to the second Milano Digital Week, which, by dealing with Urban Intelligence, sets out to analyse the multitude of technologies and applications that transform towns, employment and human relations, by having an impact on the public and private lives of people.

As the initiative promoted by Milan City Council (Office of Digital Transformation and Civic Services) and produced by the Cariplo Factory, IAB (Interactive Advertising Bureau and Hublab), DigitaLife is a long, collective tale of experiences and projects in the making, virtuous examples of transformation and new opportunities, and has an ambitious goal: to understand how innovation has changed and is changing how we live, work and interact, and how it can contribute increasingly to improving our everyday lives, the quality of life and the future itself of our towns.

At the screening of DigitaLife, there will be the director, Francesco Raganato, the producer, Marco Giovannelli and Patrizia Tossi, the assistant to the Councillor for Digital Transformation and Civic Services, Roberta Cocco.

After Milan, the film will be shown:

(the calendar is being updated)

DigitaLife came out of the idea to tell the story of how the Internet and digital technology have changed everyday life. It is revealed by the over 50 stories in the docufilm, which were selected from hundreds collected over almost two years of work. The result is a collective tale that touches a number of topics: the birth of the Internet, the loss of a dear one, the evolving world of employment, recovery after a crisis, the search for lost happiness, the possibility of socialising, travelling, sharing experiences and emotions. But also terrorism, the world of information, cyberbullying. It is all packaged with a view of hope in the future. DigitaLife is a film that speaks about a world made of connections, sharing and life.

Production by: Varese Web, in collaboration with RAI Cinema and the Ente dello Spettacolo Foundation

THE TRAILER OF THE FILM