Jerseys with a shell logo, in memory of Isma

Maurizio Jurillo, the father of the boy who died in a road accident, in October, wants to realize his son’s project: a line of clothing, with the logo he invented. 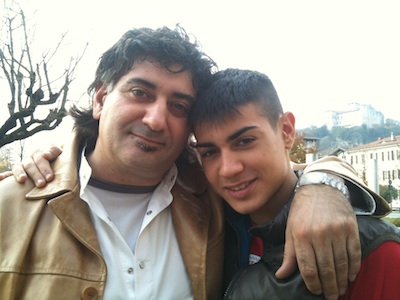 “I made a promise to Ismaele, at his grave. I would work on his project, make it real and concrete.” Death does not stop ideas, and for Maurizio Jurillo, the father of Isma, the young man from Taino, who died in a car accident on 30 October, there is one that takes precedence over all others. It is the idea with which his son wanted to build his future, at a time when many doors were closed to young people. “Ismaele could do lots of things, he was a smart lad, who learnt very quickly, and who had always worked, since he’d left school,” his father said. “He was also very creative. He invented a logo with the world within a shell. The logo symbolised the closeness of the people of the Earth, and caring for our planet, a pearl that we must respect and protect like a gem.” Maurizio will be helped in this venture by his younger son, Davide (16). And then, there are his friends, a lot of friends, who continue to leave messages and words for Ismaele on his Facebook page. “He’d been going through a tough time recently,” his father continued. “He’d had some interviews, but hadn’t found a job yet. The idea of putting the logo on a line of clothing came as a bit of a joke … We’d even gone to the Chamber of Commerce to register it, and we’d already bought some jerseys.”

Then the accident happened and everything fell apart. The jerseys that Ismaele and Davide had folded and packaged one Sunday afternoon, were just left, like the website that would promote and sell them on line. “It’s not easy to start again, but I want to finish what my son had in mind,” Maurizio continued. “I’m doing it for him, and this is my way of reacting to what we’ve been through. When I see other young people, all I can do is think of Ismaele. I think of how short life is, and I feel like saying, ‘Be careful, drive slowly.’ We’ve all been young, we know what it’s like at that age, and it might sound banal, but it’s a message I want to give to everyone who drives at night. Be careful, life is fragile.”