Letter to the Editor

Help us to save Valentina

The foundation “Ponte del Sorriso” has launched a fund-raising campaign to help a little 8-year-old Albanian girl, who is suffering from a disease that has destroyed her liver. A transplant is possible, but the money for her treatments is needed. 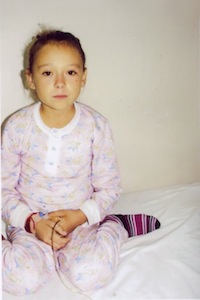 Valentina is a beautiful 8-year-old girl. Like all children of her age, she likes playing, jumping and running towards the future, with the liveliness typical of children.

A few days ago, she was not feeling well, and complained of a severe stomach ache. She was rushed to hospital, where she was given a terrible diagnosis. Wilson’s disease has destroyed her liver. She urgently needs a transplant, which is possible, even from a living donor, from one of her parents, who are both compatible and, as every parent would be, willing to do anything to save their child.

Valentina was born in Albania, and in her country there are no facilities that can perform this sort of operation.

Thanks to one of our volunteers, her uncle and aunt, who live in Varese, turned to us. The Paediatric Liver Transplant Centre in Bergamo, run by Prof Lorenzo D’Antiga, who we contacted and sent Valentina’s medical records, thinks the surgery is possible.

However, there is a problem. As Valentina is not Italian, she has to pay for the healthcare, which is estimated to cost almost €133,000; this is the price on her life!

We spoke with the Lombardy regional authority, to get them to authorise her admission to hospital on humanitarian grounds.

In the meantime, we are launching an appeal to save Valentina, and we have begun raising funds, also because, in addition to her stay in hospital, there is the cost of staying in Italy for one year, for the follow-up, tests and anti-rejection treatments.

Valentina wanted to send a photo from the Hospital of Tirana, where she is an in-patient. As the Albanian doctors have said, Valentina is in our hands and her sweet eyes are asking us for help. We are Valentina’s only hope, because she will only be able to endure a few more weeks, before she becomes an angel.

It is true, that every day, many children die in the world, but when one of them crosses our path, we cannot ignore it.

Anyone who would like to give Valentina a future, can contribute, writing “La vita di Valentina” (the life of Valentina) as the reason, sending a donation to:

made out to IL PONTE DEL SORRISO ONLUS, via Filippo Del Ponte 19, Varese.