The day we risked an invasion of Switzerland from Italy

Seventy-five years ago, on 18-19 October, 1944, Fascist troops threatened to enter Swiss territory from a mountain pass above Val Vigezzo. It was one of the “hottest” episodes involving the Swiss Confederation during the Second World War. 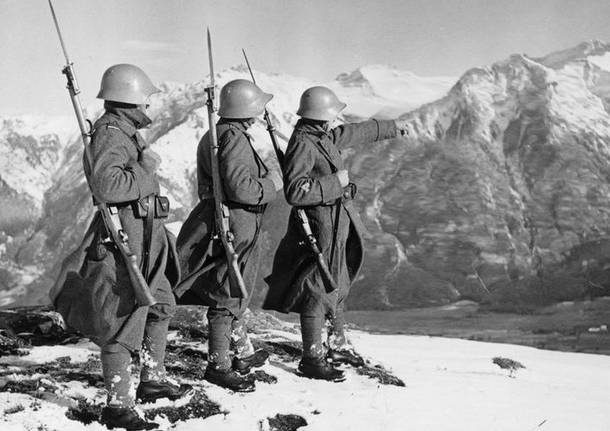 The grenadiers came at night, ready to fight and had a Swiss shield on their uniforms: it was 18-19 October, 1944, when the Swiss territory (between Valle Onsernone and Val Vigezzo) was in danger of suffering its first invasion after five hundred years, by Italian Fascists.

The episode occurred towards the end of the “forty days of freedom” of the Ossola Republic, the area that the partisan formations had freed from Nazi-Fascist occupation. On 10 October, the Nazi and Fascist counterattack began; the battle lasted about ten days. On 12 October, the partisans of the independent “Piave” division retreated from Val Cannobina, towards Val Vigezzo.

On the night between 13 and 14 October, a number of civilians, who were afraid of possible Fascist retaliation, and “Perotti” partisans climbed to Bagni di Craveggia, on the border with Switzerland. Here, there was a spa hotel, a small office of the finance police, some houses and a few barns with haylofts. The Swiss army was already lined up in the area to defend the border; the two officials in command, Captain Tullio Bernasconi and Lieutenant-Engineer Augusto Rima, were closely watching the positions of the authorities, who were blocking entry, but following their persistent requests, the Swiss Frontier Command authorised civilians and wounded and sick partisans to cross the border (Rima gave a detailed account in “The Verbano area during the Second World War. Memories and thoughts of a Swiss army official” in the magazine Verbanus).

In the meantime, Rima was looking for a solution. “The orders of the Brigade were what they were, but I told myself, it’s not possible for someone who can think for himself not to react in some way to the idea of having to witness a massacre without being able to do anything about it.” That is why Rima decided to enter Italy, talk with the partisans, and suggest a formation and strategy to enable the partisans subsequently to retreat across the border.

On 18 October, 1944, in the rain and fog, the battle between the remaining (poorly armed) partisans and Nazi-Fascist units, particularly from the Folgore and X Mas brigades, began. The Swiss soldiers lined up right along the border, using the house of a woman from Ticino, Mrs Alda Tarabori, as a stronghold. Despite the warnings of the Swiss soldiers, the Fascists hit a number of partisans, who were already in Switzerland: those hit beyond the border included the young Lieutenant Federico Marescotti, who died instantly, together with the twenty-year-old Renzo Coen, who was badly wounded (of Jewish descent, he had returned a few days before from Switzerland, to enlist in the partisan ranks).

During the battle on the 18th, the Tarabori house was also destroyed, and the two Swiss captains decided to ask the brigade headquarters in Bellinzona for backup, because the Fascist commander Paolo Violante was threatening to enter Swiss territory in order to capture and execute all of the refugees. The requested backup arrived at dawn, and it was anything but symbolic; there were two platoons of soldiers armed with light and heavy automatic weapons, and an entire company of grenadiers (the photo above shows the formation drawn by Captain Bernasconi). It was only at this point that the fascists decided to withdraw and avoid encroachment and conflict.

The next day, the funeral of Lieutenant Marescotti was held in the nearby village of Spruga, in Valle Orsenone; the Swiss officers deployed their men as a guard of honour. Despite the rigid instructions given by the government in Bern, the events at the border increased the Swiss soldiers’ sympathy for the anti-Fascists. On hearing the choruses of the Black Shirts and seeing the brutal violence against two partisans they had captured, Captain Bernasconi called the Italian fascists “reckless, brutal and lacking in any civic education whatsoever.”  Renzo Coen, who had been injured and assisted by the Swiss soldiers, also died a few days later, at the Charity Hospital in Locarno. All of the other Partisans, once disarmed, were regarded as legitimate soldiers of the Italian government and were imprisoned in Swiss internment camps (several managed to escape and subsequently went back to fight in Italy).

The episode in Bagni di Craveggia was the closest to armed conflict on the ground with Swiss troops during the Second World War. It is no coincidence that this episode has an entry dedicated to it on the German Wikipedia website. Another episode occurred in 1945, when a German column threatened to use their weapons to cross the Swiss border and avoid being captured by the Allies and Partisans.

The most significant military event in Switzerland was the bombing of the town of Schaffhausen: the bombs released by mistake by the US planes caused forty deaths, almost half as many as those caused by the Allies in Switzerland, during the entire war.

Ironically, today, the incident in Schaffhausen is almost ignored by the peaceful federation, which survived the violent Twentieth Century almost unscathed. The border incident in Bagni di Craveggia (today, a quiet, isolated place, surrounded by woods) is remembered with a plaque, which was laid in 2018 by the Association of Partisans and the Municipalities of Craveggia and Orsenone. Prior to that, there had only been the bullet marks on Ada Tarabori’s old house and two vases made by the shell casings of the Fascist artillery, who shot across the border on that 18 October in 1944.