The era of Chancellor Coen starts with a farewell

Renzo Dionigi, the founder of Insubria University, who retired this year, leaves the reins to his successor. 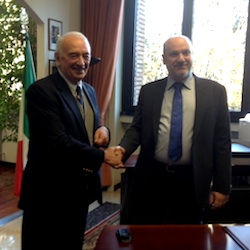 The day of the changeover has come. Renzo Dionigi, the “father” of Insubria University, is leaving his creation in the hands of his successor. On 1 November, Prof. Alberto Coen Porisini, who received the highest number of votes in the election, last 28 September, became the university’s new Chancellor, to all intents and purposes. A new era is about to begin, although it marks the end of another, a historic one, which began with the first lectures in the newly formed separate premises, which saw independence obtained, and which has recently seen the inauguration of the brand new and long-awaited “Carlo Cattaneo” College. Until today, Dionigi, who retired this year, has been the political face of the university. He is the only person to have led it, and the protagonist, who, with a few others, fought hard to have premises in Varese and Como. And from here, from its premises, the university must look to the future.

Professor Coen has been given the complete trust of his colleagues, personnel and students, and he will now have to face delicate and complex challenges. Insubria is not exempt from the profound change that is affecting the whole Italian university system. As in the other universities, he has a difficult problem to sort out, namely that of public resources, which are increasingly difficult to obtain. Then there are strategic questions, like the relationship with the local area, which needs to be maintained and strengthened.

Not less important are the new rules introduced by the Gelmini Reform, which also affect organization (there are no longer any faculties), and management. During the campaign that preceded the election for the new chancellor, the most critical people demanded a leap in quality, claiming that the university lacked any real identity, and fearing unification. The critics were silenced by Chancellor Dionigi. “Insubria is alive and well, and is no way terminally ill,” he said a little over a month ago, during a public speech. And it seems to be true, also judging by its physical appearance. The university’s vital activities can clearly be seen: Insubria is investing a lot in its buildings, and today, has the look of a large building site. If we consider what is happening in Varese, we can see, for example, that the premises are shifting  to Bizzozero. While the bulldozers have come to Via Ravasi, in Bizzozero, a college has been built, which was inaugurated two weeks ago by the Education Minister Profumo, and if everything goes as planned, there will be other services for the students and local residents. The university is creating its own new campus and is transforming a whole district. Bizzozero may become “academic”, and create value for the whole area, or simply host the university premises. The difference will be made by the choices of the university, but also those of the town, which will have the chance to take, or to leave, the opportunities provided by this change.