Workers on strike at the JRC: “Don’t say we’re privileged”

Some fifty employees went onto the streets to protest against cuts at European institutions, which might result in two hundred dismissals, also at Ispra. 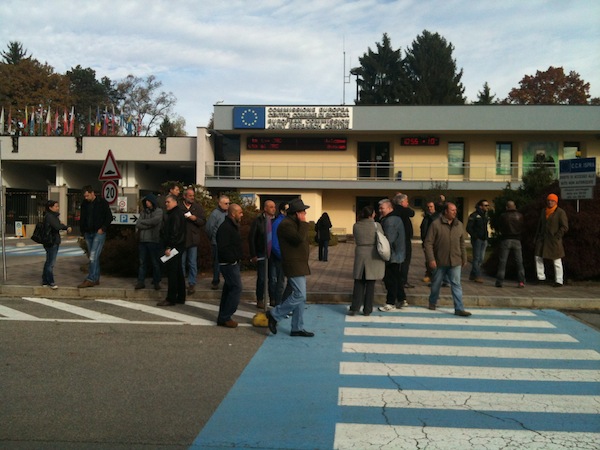 Even the rich go on strike, you might think. But, this morning, the approximately fifty employees who gathered in front of the entrance to the Joint Research Centre in Ispra did not want to be labelled, and immediately explained themselves. “We’re not here because of the salaries, and you’re wrong to think that this centre is still a goose that lays a golden egg.” The reason why the employees were protesting, in Ispra and elsewhere, is the cuts that the European Union might make following the pressure from some member states. Eight states in particular (including Germany, France, the United Kingdom) are demanding cutbacks of at least €1 billion, with consequences on the budgets of the individual institutions.

The reasons for the strike – “According to the JRC, this will result in about two hundred employees being dismissed” the workers explained. In Europe, there are research centres of this level in only five countries, and Ispra is the largest of all. “For this reason, the idea of weakening it is cause for concern,” said Gianfranco Sottocorno, the Italian chairperson of the Pensioners’ Association for European Institutions, “but we are even more worried about the intention to reduce the independence and strength of the public function. We hear talk of the spending review, but this operation has nothing to do with this. It’s only an question of image, of façade. They want to show people how tough they are, by acting in line with prejudices and everything, but at a national level, no state has changed anything. Let’s talk about it. The European Union has as a total of 50,000 executives, in all of the institutions, for a population of 500 million. What burden do the employees of individual states have?” According to forecasts, the cut in resources might also have an impact on new recruits, on career promotions, on working hours and on the retirement age. Sottocorno continued, “If someone accepts a certain job, one of responsibility, away from home, he does so also because certain conditions have been guaranteed; if these change in the middle of the job, problems arise.”

European talent and “temporary workers” – “The image that people have of JRC employees is often old-fashioned and distorted,” added Keith Ramseay, of Union Syndicale, the trade union that has the greatest presence in the Commission. “In fact, the 2004 reform greatly modified the types of contract, selection procedures and taxation of the workers. But what I’m concerned about is also the conditions for the foreigners at Ispra. Many of them come into the JRC between the ages of 30 and 34, they come here from abroad, they leave their friends and family. For example, I can see my parents only twice a year; it’s not at all simple. It’s a life choice made because of the working conditions, of course, but also for a European ideal. We got through a strict selection process, we’re highly qualified workers, and as such, we should be acknowledged. Today, talented people work hard to come here and they make a quality contribution to the whole European Union; but if the guarantees disappear, the brains might choose to go elsewhere and, as a consequence, this will be detrimental for the whole community.” Even the myth of super-high salaries is not true for a lot of people. “There are high salaries, but they’re those of managers and officials,” says one worker. “For contract agents, for example, and there are about a hundred of us, the basic salary is €1500, with no Christmas bonus, and no severance pay. Moreover, all employment is with a fixed-term contract, for a maximum of three years. Even our young people are on short-term contracts.”