When parents have to pay the paediatrician

On 1 January, paediatricians stopped performing some tests, such as pharyngeal swabs, free of charge. But it is not only a question of saving money, as the director of the local health authority, Giovanni Daverio, explains. 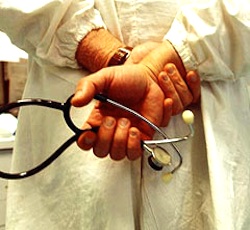 Pharyngeal swabs, urine sticks, eye and hearing tests, and allergological tests are available, but only if you pay for them. On 1 January, Lombardy Region cut €1 million that was destined to refunding tests that doctors used to carry out free of charge, for children, in their surgeries. These doctors form a calibrated care network in the region, that relieves the pressure on the facilities of the public health service.

Since the beginning of 2013, this network has been without funding. Paediatricians’ trade unions have raised the alarm: funding has been cut for diagnostic services and screening activities, such as hearing and eye tests for children. The fear is that it will be the youngest children, from 0 to 5 years of age, who will be most affected. The cut represents about 20% of the additional resources given to local health centres for diagnostic activities, check-ups and the prevention of disabilities. You can ask your paediatrician for them, but they will cost you: for example, a pharyngeal swab is €15; the alternative is the public laboratory.

The general manager of the local health authority, Giovanni Daverio, says we should not exaggerate the problem. “First of all, the cut is about €800,000. The decision was taken by the consultation committee, in which technicians from the local health authority discussed with paediatricians’ trade unions. There are some services that have not been touched, nationally, such as check-ups for lazy eye, others that we decided to keep, and others that will no longer be refunded, also because there was a question of suitability. For example, some doctors perform a lot of pharyngeal swabs, whereas their colleagues rarely do. There has also been a large cut in extra contributions for 0–6-year-olds, who, undoubtedly, are more complex patients: from a budget of €560,000, we’ve gone to €420,000, but there won’t be any repercussions on the service, because we’ve come to an agreement, going from €12 extra per child, to €9. In any case, we’ve allowed ourselves a few months to monitor the situation, and to understand whether the suitability can be improved. In any case, doctors that want to continue providing these services for their patients can do so.”

Every year, Lombardy spends over €160 million on paediatrics; the total number of children is 1,145,000.