Busto Arsizio is good for Italy. Also Russia defeated for 3-0 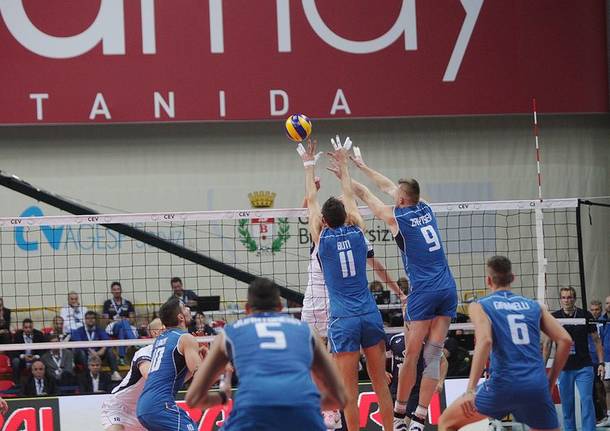 The Italian volleyball team is amazing, because, in a crowded PalaYamamay, it defeated the battleship of the Russian incumbent European champions for 0-3 (20-25, 19-25, 19-25) and gets through the semi-finals of the most important continental tournament.

The Busto match has been intense, and since the first ball both formations have demonstrated that they wanted to start off a good and very hard-fought challenge, rich in powerful actions and noteworthy spectacle.

Courage and heart in the game until the last ball: in the course of just one summer the Italian head coach Chicco Blengini has managed to reunite a team that seemed to have lost its way a bit (also after the resignation of Berruto). And this time all the Italian athletes did well, led by the oversight of Giannelli and dangerous with the attacks of Zaytsev and Juantorena. What’s more, a service that harms the Russian formation and the ability to follow the indications from the substitutes’ bench and to find the spaces to stop Alenko’s players.

Even this evening the bleachers of viale Gabardi, coordinated by the “Amici delle Farfalle”, dressed up in azure for the occasion, sang at the top of their lungs for Buti and his mates who thanked them by “diving” in front of their stand at the end of the match.

So they get through to the semi-finals, the dream continues against Slovenia, the next opponent of the Italian team, who speak a little Italian because in the substitutes’ bench there is Andrea Giani, the one that wrote the history of our volleyball and that won everything with the Italian team and that maybe has inspired in many of our current athletes the desire to play this sport. In the other semi-final, instead, France and Bulgaria will confront each other (they will play on Saturday, October 17th on the taraflex of the Arena Armeec in Sofia, starting from 5 pm. The Italian team should play the second match).

The match – Chicco Blengini fields Giannelli for setting, Juantorena is on the other side, Zaytsev and Lanza are in forward line, Buti and Piano are in the middle, Colaci is as a sweeper.

The first set begins uphill for the Italian team who has to follow the Russian battleship which is in advantage of 6 points out of 3. However Italy has gone in with determination and it shows that it is able to cope with the opponents. With lot of pressure in the service and in the block, the Italian team achieve 10+ points (10  out of 20). The Alenko players are upset and they make up for part of the disadvantage (15 out of 21). However Blengini requires the time out and demands power and precision to not let Russia attack and gaining ground. At 20 out of 24, the Italian head coach is forced to demand the time out to bring back concentration and order in the field and at the return the Russian make a mistake in the service so the set is finished with 20 points out of 25.

The second set begins with balance (2 out of 3). In the field there is a great battle and the first technical time out is required at 6 points out of 10. They re-enter in the field with the fast services of Zaytsev who scores two amazing ace (6 out of 10) and he forces Alenko coach to demand the time out.

The Italian players are in advantage and the second technical time out is required at 12 out of 16. The coach Blengini guys continue their rush and they gain 15 points out of 21.

It is time out for Blengini at 18 points out of 22, to ask for the attention at the block over the Russian left-handed forward who has a trajectory of attack different than others. It is Buti, the team captain, that scores 19 out of 25 and the Palayamamay Public are exalted.

Good start too in the third set for the Italian team that once again was in advantage 4 points out of 7. The rapport between Giannelli and his forwards brings to the first technical time out at 5 out 8. At the return in the field, Italy still took the lead of the match (8 out of 13). The double Russian ace brings it to 13 out of 18 and Blengini stops the game to restore order. At the end of the set, the Italian team, aware of being ready for the final shot, ask for public support in order to make the chorus louder over the field.

People answer and the “Tsar” Zaytsev thanks by scoring and with a result of 19 points out of 25, Italy flies to the semi-finals in Sofia.

Other matches of the quarter finals