From the River Li to trekking the “Tiger leaping gorge”

Giorgio Vanni continues his overland journey from Sesto Calende to Australia. Here is the story of the last few days, in China, before he set off again for Vietnam 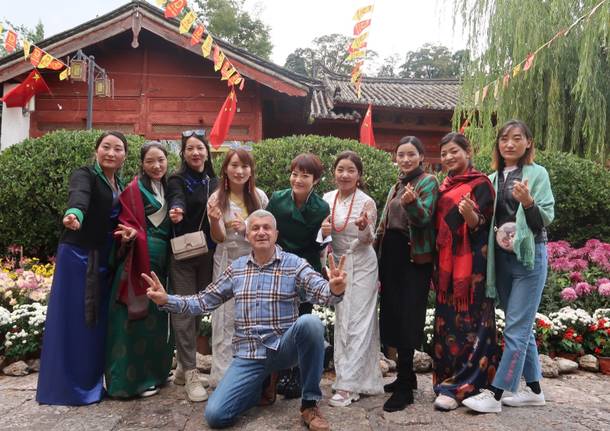 Giorgio Vanni continues his overland journey from Sesto Calende to Australia. The eighth episode in China (all the stages of the journey can be found here):

On leaving Shanghai, I headed west towards the Guangxi region, to sail along the River Li, and then into Yunnan, to go trekking and to meet the ethnic minorities. It was the end of my trip in China, before Vietnam. After nine hours by train, I arrived in Guilin; I went back up the River Li by boat, to Yangshou, and the sailing was good.

Going back up the valley, I could see the peasant villages, and watch the fishermen while they were fishing with cormorants; it seems that every ten fish caught, they let the birds eat one. In particular, I was able to admire the wonderful, panettone-shaped hills that surround the river. This is a karst phenomenon, which formed mountains of incredible shapes, where, millions of years ago, there was the sea. Alas, I was disappointed by Yangshou, because it was so full of tourists and of shops selling junk at higher prices than in town.

And yet, the Chinese are crazy about this; it seems that in parallel with the consumerism that permeates the country, they have a Disneyland-like approach to tourism. So, I rented a scooter to go along the bank of the River Li, and it was relaxing to get lost in small villages surrounded by rural landscapes. The electric scooter had a range of fifty kilometres and with a fast recharge, while I had lunch, I increased the range. I hope this means of transport spreads to us as well, as it’s cheap and certainly less polluting than the millions of petrol scooters on the Chinese roads!

On leaving Yangshou, I took the train to Dali, in Yunnan. It is in this province, which borders Tibet to the north, and Burma to the west, that about half of the Chinese ethnic minorities live. Alas, Dali too was a number of shops selling junk, and clearly reconstructed buildings. I was beginning to regret planning a four-day stay, but I changed my mind when I visited the complex of temples of the Three Pagodas, an attractive sight, both for the pagodas and for the nine temples up in the mountain.

Each time, we thought we’d reached the last one, we discovered there was another one, higher up; all within about two thousand metres, in an engaging atmosphere of spirituality and prayer. And Lake Erhai, the seventh largest in China, was also beautiful; I circumnavigated it the next day, visiting markets of the Bai minority. In the meantime, the screen of my poor mobile phone had broken, and I panicked as I had when I lost it in Yekaterinburg, but was relieved when they repaired it in half an hour. One positive aspect compared to the past was the cleanliness and hygiene of these towns; now, you frequently come across free urinals, it’s rare to see someone spit on the ground, and in the streets, there are numerous garbage collectors, picking up trash.

On leaving Dali, I continued north, to Lijiang. Here, the old town was much more beautiful than Dali, touristy admittedly, but with still wonderful, isolated and peaceful views. How glorious it must have been before the earthquake and the advent of mass tourism. Just like the old town of Shehe, just half an hour away, where I was lucky enough to meet an ethnic group that live on the border with Tibet, who performed really evocative songs and dances.

On my return, I received another demonstration of kindness. Four students who I asked for information, not only took me to the bus stop, but were worried I didn’t have the app for my smartphone or the money, and wanted to pay for my ticket! Over these weeks, I’ve met some lovely young people, who study, getting ready, optimistic about the future, eager to embrace the world. Positive, aware and proud of the road taken by the nation, without exaggerated nationalism, but with the healthy approach of Confucianism: respect for culture, and work ethics. Hoping for a future of greater freedom and concerned about the rising cost of living, especially about housing.

I felt there was the spirit of post-war Italy, as my parents had described it to me: enthusiasm, seriousness and the desire to take on the world had raised the nation. The Chinese, too, are great savers, with a deep sense of family ties. Finally, the best part of the stay in Yunnan: trekking the “Tiger leaping gorge”. As this trek would take at least two days, which I didn’t have, I organised a shorter version, in one day, reaching the base by bus, early in the morning, to climb back up the gorge.

The trek is wonderful, the most beautiful I’ve ever done, after the base camp of Mount Everest, and it would have been unforgivable to miss it. Here, the Yangtze gorge is the deepest in the world, with an altitude difference of 3900m, and with the river descending 200m over fifteen kilometres, over impetuous rapids, flanked by mountains that exceed 5500m. The route climbs steeply, and then continues along a path cut out of the rock, which needs to be tackled carefully, because it’s narrow and slippery, with dangerous points crossed by waterfalls; if you fall here, you can say “bye bye”, because the cliffs are crazy.

The people who dug out this path did an incredible job. I came back down in the afternoon, to catch the bus to Lijinang, I took a break in a guesthouse, with hot tea and dumplings made of yak’s cheese and honey, a real pleasure after the journey and the rain. Then, night-time in the anonymous capital of Kunming, and the last Chinese train to the Vietnamese border; next comes Hanoi. They tell me that, at the border, the paperwork is annoying; but then, until not long ago, the journey to Vietnam was impossible. It doesn’t matter, the pleasure of travelling increases your patience!