The museum of flight hosts a “sea giant”

The SH-3 is one of the biggest helicopters used on board aircraft carriers; the Volandia museum exhibits one that was bought thanks to the collaboration of the Italian Navy, which used it from 1973 and 2008 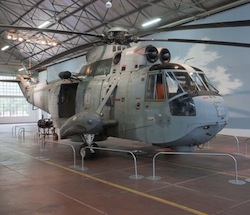 This time, the Volandia museum of flight will host a giant of the sea. The SH-3 is one of the largest helicopters ever built, and, among its features, it has been a “sea helicopter” used by navies all around the world. The “Sea King” was used for transportation, submarine hunting and sea rescues, and it was also used by the Italian Navy’s aviation unit. As a matter of fact, it is from the Navy that Volandia museum has bought the model, which, from today on, will be officially exhibited at the “rotating wing”, that is to say, the pavilion where helicopters, most of which produced by the Italian manufacturer Agusta, are hosted. The handover and ribbon-cutting ceremony was held in the presence of Admiral Paolo Treu, Commander of the Italian Navy’s Armed Forces.

A feature that is a peculiarity of some models preserved in Volandia, such as the little helicopter of the Tax and Finances Guards (used for hunting smugglers along the Adriatic Sea, it is presented with a container of cigarettes) or the Agip helicopternext to the "ghost of the desert", one of the most charming showrooms in Volandia. Together with the SH-3 is now exposed also a large model (240 kg) of the battle cruiser missile launcher helicopter carrier Andrea Doria (that embarked two helicopters Sea King).

The Italian Navy chose in 1965 the SH-3D version for the battle against the submarines, receiving the total of 36 models. This fact led to the production with licence by Augusta, that built also two aircraft used since 1976 by the 31st  Formation of the Military Airforce for the needs of the "Special Transport" of the head of the State, of the Pope and the government. The Elivie Company used two of them in 1967-1971 in the area of Naples, the islands of Ischia and Capri and Sorrento. Some SH-3D have been converted, since 1994, to the NLA configuration for the needs of the San Marco Battalion, disembarking the equipment antisubmarine in order to be able to carry soldiers.

The model exposed was built by Augusta for the Military Airforce with MM.5021N and codes 6-20. It flew on 30th of June 1972 piloted by Luciano Forzani and it was accepted on the 26th of July 1973. After being used for testing the AS. 12 air-surface missiles, it was used in the role of anti-submarines especially by the 1st Group Helicopters of Luni (La Spezia). It concluded its service in 2008 as NLA with the 4th Group at Grottaglie (Taranto). It arrived in the Museum in 2010.