I pay for my coffee with my mobile

The Varese Smart City, Italy master plan, has been created. Thanks to the project, it will be possible to pay with a Smartphone in seventy shops. It starts with an experimental step, but, by this year, the opportunity will be extended to all citizens 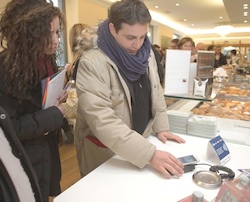 Once, a mobile phone was only useful for telephoning. In recent times, it has become a small computer with which you can surf the net, read newspapers, keep yourself in contact with your friends, chatting or sharing things on social networks. From today, it can be also used to pay.

We are in an experimental phase, but thanks to different collaborators Varese Smart City starts. It is a system that will allow simplified transactions in approximately 70 shops and in future also in various public services.

The project has been realised by Liuc Lab#ID, in collaboration with the Municipality, the Chamber of Commerce, retailers’ associations, UBI Banca, Carta Si, Vodafone and SIA (primary international processor of payments, specialised in the planning, realisation and management of innovative solutions, in order to create the interoperability among Telco, banks, enterprises and service provider). It was presented by Victor Massiah, UBI Banca CEO, with Giuseppe Masnaga, Banca Popolare di Bergamo General Manager, in front of city authorities and representatives of local financial economic community, among which there are Varese Tourism and Commerce Representative, Sergio Ghiringhelli, Varese Chamber of Commerce President, Renato Scapolan and General Secretary. Mauro Temperelli, Lab#ID (LIUC – Cattaneo University) Director, Luca Mari.

Enjoy Mobile Payments uses NFC (Near Field Communication) technology and, through the virtualisation of UBI Banca stored-value card Enjoy inside new generation Smartphone SIM card, it allows us to pay with contact-less payment method in the shops that are provided with a POS with this technology. In Varese, the number of these shops is increasing: today there are more than 300 enable devices. It is an innovation that deeply changes the purchase experience and that wants to contribute to further accelerate the transition from traditional currency to virtual or electronics currency, also thanks to smartphones spreading forecasts: 32 million are estimated on Italian market for 2012 and they will grow up to 50 million in 2015. “Varese is the second most important reality for our bank,” Giuseppe Masnaga, UBI Banca, explains,  “Varese Smart City is an important experiment that comes true thanks to Liuc presence, which is a very innovative area. One year ago, we started using a new model of credit card, which now allows us to develop a payment method, using a Smartphone. In the first months of 2013, we expect a test phase and then it will be available for all citizens.”

Massimiliano de Carolis, which is in charge of Vodafone Mobile Payment, explains: “The very interesting aspect of the project is that it involves a complete local ecosystem of enterprises and institutional stakeholders. These same actors will play a fundamental role in developing NFC services and in favouring their spread near Italian mobile companies’ customers. UBI initiative is very important for mobile companies, because it starts on the new technological platform that we are developing together with main Italian issuers. This element will favour the rapid transition from experimentation phase to commercial extension on large scale.”

Representative Sergio Ghiringhelli proudly took part, reminding that "Varese has always been different for innovation. We have not always made systems, but this time we are succeeding in doing it and this will give very positive results.”

Mauro Temperelli, thinking about companies’ opportunities, stated that "today the quality of the product is no longer sufficient: you need to know how to use it. Knowing from an entrepreneur that NFC is not only a payment instrument, but also a system that helps competing, pushed us to receive this project. Technologies as these can help us to approach also Expo 2015. The Chamber of Commerce is a system integrator and due to this we have immediately believed in Varese Smart City.”

Liuc Lab#ID, Luca Mari, closed the works. “We are in a very important moment because, after a lot of study, we now have a true prototype. We work for the territory; we are not in an Ivory Tower. This is not a research plan. There is not anything new in technology, but we want to bring true results to 70 retailers. Our role in the market is neutral. The architecture we developed is open to other actors and territories. It is a very fascinating phase because now, with NFC, it really makes sense talking about Internet things and not only Internet ideas. We now pass to the concrete and useful application of the many opportunities that technology can offer.”