Italian secret service in action in the enquiry into “reorganisation of the dissolved fascist party”. Chairman of the group is being investigated. 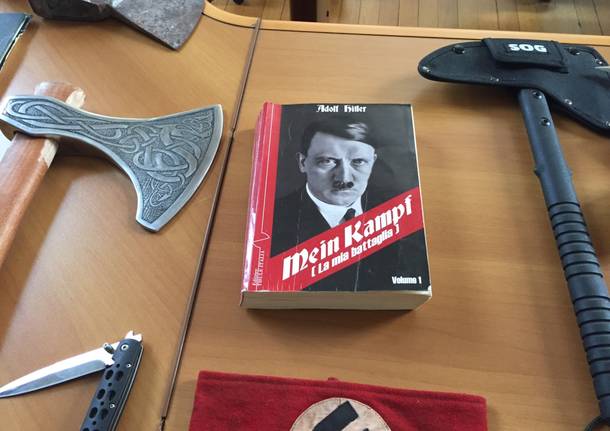 “Reorganising the dissolved fascist party”. This is the crime for which the chairman of the far-right group, “Do.Ra. Comunità Militante dei Dodici Raggi”, is being investigated.

The men of the Italian secret service, DIGOS, went into action in Caidate, near Sumirago, in the early morning of Tuesday, 12 December, in the offices of the far-right group, in Via Papa Giovanni XXIII, and in the home of Alessandro Limido, 38, the son of Bruno, the former Juventus and Varese footballer. The group’s offices were seized and Limido is being investigated for the crime of “reorganising the dissolved fascist party” (Scelba Law, No. 645, of 1952). The position of another two people, who are close to the group and who were found in the home of the chairman during the search, is being considered by the investigators.

The men of the State Police, with the coordination of the Service for Opposition to Extremism and Domestic Terrorism, of the Central Department of the Prevention Police, carried out searches ordered by the Director of Public Prosecution’s Office at the Courts in Busto Arsizio, and found a variety of clearly pro-Nazi material: swastikas, propaganda books, such as Mein Kampf, and leaflets. And weapons: axes, knives and hammers bearing engraved runic symbols.

“Do.Ra. Comunità Militante dei Dodici Raggi” was founded in 2012 and has its headquarters in Sumirago, in the Caidate area. In the charter, it is defined as a non-party, non-profit, cultural association, but is openly inspired by the principles of National Socialism, with denial of the Holocaust, evocative and symbolic events, celebration of Nazi anniversaries, from Hitler’s birthday to the solstices, with burnt swastikas, to conjure up the Führer and the splendour of the National-Socialist past.

The facts dating back to the end of last year contributed to the investigation; on Monte San Martino in Duno, not far from the Memorial to the dead partisans, about thirty Do.Ra, militants started a commemorative event, by placing a “Tiwaz cross” (the symbol of the warriors of Odin, used by the Nazis) and a laurel crown, with the colours of the Nazi flag, to remember those of the German army who died. A similar initiative was repeated last 18 November. Magistrates and DIGOS are also targeting an online petition, which the group provocatively organised last January, to “call for ANPI, the National Association of Italian Partisans, to be outlawed.”