From Malpensa to Busto on foot, along the Way of St. Augustine

The appointment is for 25 November, with another walk along the Way of St. Augustine. 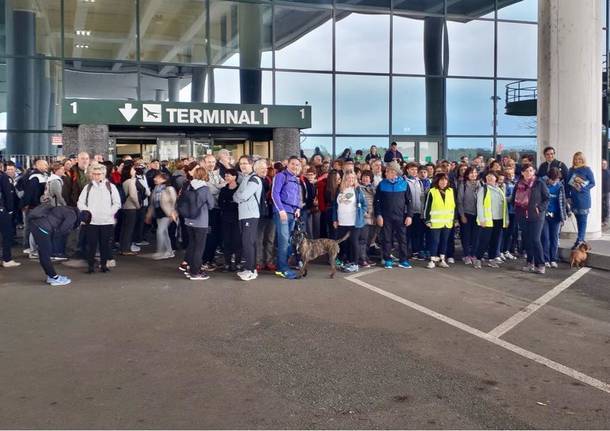 The second walk from Malpensa to Busto Arsizio, along the Way of St. Augustine, the religious and tourist route that connects 50 Marian sanctuaries in Lombardy, including Santa Maria di Piazza in Busto Arsizio, will be on 25 November. There is a change with respect to the first walk, last April, because it is starting from the airport’s Terminal 2, where there is the memorial dedicated to the founders of Malpensa, and not from Terminal 1 (see photo).

The walk is being organised by the town council, in collaboration with the Association “Cammino di Sant’Agostino”, to mark the 70th anniversary of the foundation of Malpensa Airport (formerly known as Busto Arsizio Airport). The route, marked by yellow arrows, is about sixteen kilometres in length, and follows paths, pavements and footpaths. The program for the day begins, at 8.30 a.m., with the gathering in the Departure Square of Malpensa Airport, Terminal 2 (opposite the Moxy Hotel), where the Pilgrimage Credentials, which are a sort of passport on which the stamps of the fifty shrines along the route can be collected; the Credentials will be authenticated on arrival in Busto Arsizio.

The start is scheduled for 9.15 a.m. and arrival in Busto is expected 3 hours later, at around 12.15 p.m., in Via San Gregorio, opposite the gallery of the same name, where a plaque dedicated to Benigno Airoldi, a well-deserving citizen of the town of Busto Arsizio, and one of the founders of the airport and of the “Banca Alto Milanese – Giorgetti, Saibene, Airoldi & Co.”, which subsequently became the Banco Lariano, which is now part of the San Paolo Group, will be unveiled. On the plaque, there will be the words “Pietre Vive” (Living Stones), like so many others scattered around the town that commemorate men and women who have worked to benefit the town. Participation is open and free of charge. For further information and reservations: info@camminodiagostino.it.

The Way of St. Augustine is 620 km in length, to be covered on 26 days, and was designed to connect, on foot, fifty Marian Shrines and Augustinian sites in Lombardy. In addition to this devotional inspiration, the Way represents as a privileged vehicle of “slow and sustainable” tourism, to get the territory known by means of its natural parks, paths into the woods, rivers and lakes. Along the way, there are numerous Romanesque basilicas, waterways, museums, villas of delight, the countless testimonies to the genius of Leonardo da Vinci. With its extension, the Way of St. Augustine makes it possible to fully enjoy the artistic, architectural, environmental and cultural treasures of a territory that was the capital of the Western Roman Empire, the Lombard kingdom, the Duchy of Milan.

The Way of St. Augustine also enjoys a very favourable proximity of no fewer than three airports: Malpensa, Linate and Orio al Serio, which are among the busiest in Italy. Malpensa Airport, in particular, is characterised by the fact that it serves as a wide-ranging hub, that brings visitors, essentially from all parts of the world, to Lombardy.