In search of the smart city

In these modern times, is it possible to think of a smarter city? This is the question that participants in a conference organised by the Varese Confederation of Artisans and the Union of Industrialists, on the afternoon of 6 November, tried to answer. 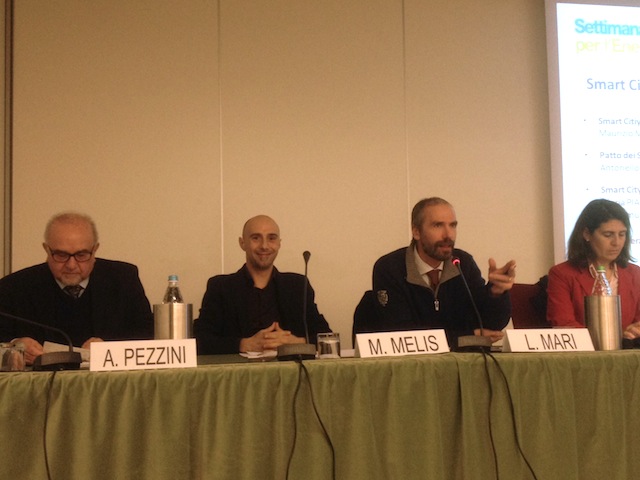 In these modern times, is it possible to think of a smarter city? This is the question that participants in the conference organised by Confartigianato Varese and the Unione Industriali on the afternoon of 6 November, tried to answer, in an attempt to solve the problem of how to transform urban areas into more liveable and competitive spaces, with projects that make use of hi-tech and that save energy. Starting from the idea of a smart city.

“The concept of a smart city is like a modern version of Tommaso Campanella’s ideal city. It’s something we have always sought, although what it looks like has changed over time,” explained Maurizio Melis, a journalist with the Sole 24 ore Group, who is known to listeners to the extremely popular programme on Radio 24, as Mr Kilowatt. “Today’s ideal city, the smart city, must be sustainable, inclusive and liveable. These are the three characteristics we need to work towards.” These characteristics are what every development must adopt, applying collective imagination and consideration.

Melis, who has been dealing with the topic in the last few episodes of his programme, focuses on the possibility of achieving the characteristics, by identifying problems in the city and finding new solutions to them (and he mentions the Brazilian cableway built by the company from Trento, Leitner, to resolve the question of logistics in the mining area, in an economical and sustainable way).

Such solutions cannot ignore technology, which, over the years, has become increasingly user-friendly. “We can begin by thinking of a “smart city” that focuses on the quality of its inhabitants, thanks to technology and to the Internet, because computers and smart phones are increasingly easy to use,” Melis went on. “This used not to be the case, but it’s a comprehensible process; when technology isn’t well developed, it’s more difficult to use, but as it develops, it becomes intuitive and more available to everyone.

But what is a smart city, and what does it consist of? “A smart city is a city of the future, but, above all, it’s a city that saves energy, in line with development that, in some way, has been “imposed”, fortunately, by Europe,” explained Antonello Pezzini, a member of the European Economic and Social Committee. “It was a Danish experiment that inspired the so-called “Covenant of Mayors”, which Italy is trying to follow. The Danish government had said, ‘create a project in which at least 50% of your energy needs are satisfied by alternative sources, and we will fund the rest.’ This project subsequently became the model for Europe, although, in the case of Italy, it has been reduced to 20%.” These covenants and projects reward approaches to saving that protect the environment, setting off the process of growth from a different starting point, one that restores balance in the relationship between modernity and the environment.

But on one condition. “A truly smart city must start out from a comprehensive view, otherwise, it is only a sum of things,” said Gloria Piaggio, the coordinator of Genoa Smart City, and European Project Director of Genoa City Council, who “won” three European bids of considerable financial size, thanks to their projects that “rethink” the city in a “smart” way. “Behind the smart city, there is the idea of connections between people,” Piaggio explained, “and our administration considered the search for a better quality of life to be a central element. This search is based on, and aided by new technologies, and consists, above all, of smart thoughts. So, we’ve assembled the various city organisations (from the authorities to companies, to societies and associations), to gather their proposals, and to listen to the projects that can also get the economy going again: things done by those who believe in them, by also by those who want to get people in these parts working again.”

Because, today, more than ever, the secret of a smart city is knowledge. Or, as Luca Mari, a lecturer at the LIUC University in Castellanza, and the coordinator of the university’s RFid laboratory, “Knowledge is the new infrastructure.”