The preparatory cartoon of the great fresco “Flight into Egypt”, which the artist produced in 1983, has been displayed for the first time. 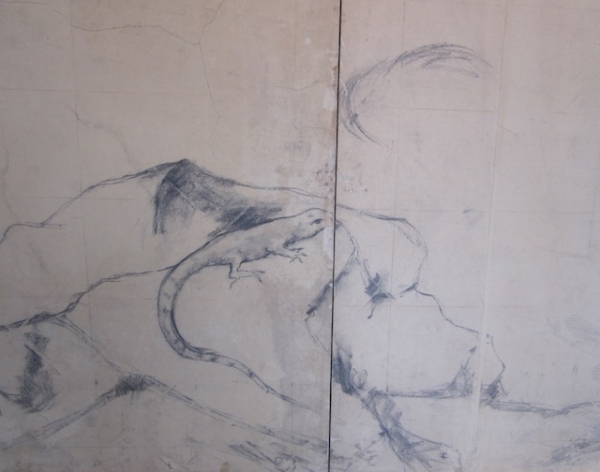 A mother nestles her baby in her arms. A laden donkey accompanies her to safety, guided by the husband and father. In the saddle, there are the tools of the carpenter, a jar and a basket full of clothes. Nearby, a little goat, which helps to feed the baby, is the unwilling protagonist of this adventure. The Flight into Egypt is one of the most significant moments in the life of Jesus, on which Renato Guttuso worked enthusiastically, in 1983, after being commissioned by Monsignor Pasquale Macchi, in the third chapel on the Sacro Monte, in Varese. This is one of the most important testimonies of the master’s work in the town, and on the centenary of his birth, the Association “Amici di Piero Chiara” is dedicating an exhibition, including a gem from the collections of Augusto Caravati: the preparatory cartoon of the fresco, which has never previously been seen by the general public. The exhibition, which is organised by Paolo Zanzi, leads up to the work, which has been is placed in the oval room of Villa Mirabello, with information panels and photographs, which help to contextualise the fresco; the cartoon is displayed facing southwards, just as the fresco does on the Sacro Monte. A tube structure has been made to support the cartoon. The exhibition is accompanied by a description, by Rolando Bellini.

Guttuso was commissioned to produce the large fresco, an acrylic painting on a cement panel, by Monsignor Pasquale Macchi, the secretary of Pope Paul VI, and the then archpriest of S. Maria del Monte, who undertook a massive campaign to restore and improve Sacro Monte, in the 1980s. The work was made to cover a previous fresco, which had the same subject, and which was painted around the middle of the 17th century, by the Lombard painter Carlo Francesco Nuvolone.

Inauguration of the exhibition, 5.15 pm, in Villa Mirabello, in Varese.

The Recovered Masterpiece. Renato Guttuso and the Flight into Egypt, on the centenary of his birth, organized by Rolando Bellini and Paolo Zanzi.

The exhibition will be open until 3 February, 2013.

Sunday, 25 November, 11.00 am, Villa Mirabello, Varese, a guided tour of the exhibition, with Rolando Bellini.

“Renato Guttuso and the Flight to Egypt” is open to everyone, especially to high schools in Varese, which should make reservations. The event will be support by audiovisual material.

Saturday, January 26, 2013, 3.30 pm, in the Baroffio Museum and Sacro Monte Sanctuary, above Varese, “Passi d’Arte: The Flight to Egypt, from the Middle Ages to Guttuso”, a conference with Laura Marazzi.