A commitment to Mali

Laura Magnani, the chairwoman of the Yacouba Association, talks about her work for the country tormented by war, and the situation behind the French intervention in the last few days.

Mali is a most beautiful country. It has fascinated many of us on the trips we’ve taken 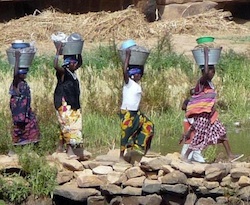 over the ten years that our association has existed. With its many volunteers, Yacouba for Africa is involved in international solidarity, in cooperation, and was founded in Mali, in Dogon, a village whose resources and culture we have learnt to appreciate.

We began our activities, responding to a request to build a school in the village of Walia, at the foot of the cliff of Bandiagara and we continued, extending our interventions to other villages, responding to requests to provide water, school support, professional training and health protection.

During the trips, when we checked the projects, we had the opportunity to get to know the people, to enjoy their hospitality and generosity, and to visit the country.

We’ve also been to Timbuktu and Gao, the areas where the fighting is currently to be found, which were declared independent from the rest of Mali by the national liberation movement, Azawad, in the spring of 2012.

Mali is a very big, very poor country, that is mainly desert, situated between the territories with most problems of infant mortality, shortages of drinking water and malnutrition. It’s populated by a number of ethnic groups (Bambara, Bozo, Songhai, Tuareg, etc.), each with its own characteristics.

The situation underlying the French intervention over the last few days is complex: the history of the Tuareg people and their wish to have their right to self-determination acknowledged, the return to the country of well-armed and well-trained Tuareg militiamen in the pay of Ghadafi, exploitation, by the Islamic extremists, of Azawad’s wish for independence, the military coup to remove President Tourè, and lastly, the request, to other African states and to the European Union, for military support/intervention to bring the country back under the authority of Bamako. Of course, we shouldn’t forget the West’s interest in the resources of uranium, oil and precious minerals.

I’m unable to make a political and economic analysis of what is happening, but I can outline the difficulties that the people are experiencing.

First of all, there are the Azawad inhabitants themselves, who have seen the application of Sharia law, and their freedoms and acknowledgement of their personal rights further reduced. They certainly weren’t the owners of their land before, but neither are they now, despite the declaration of independence and the faith placed again in their liberation forces and in the groups of Islamic extremists that operate in Azawad.

Many inhabitants in those territories (about 230,000), of various ethnic groups, have fled and found refuge in Bamako and in other parts of the country, or have emigrated abroad (at the end of December, the operators of the United Nations High Commission for Refugees reported 54,100 being accepted by Mauritania, 50,000 by Niger, 38,800 by Burkina Faso, and 1500 by Algeria), forced into exile and to life in refugee camps, without the prospect of returning soon.

To a large extent, Mali lived off tourism, which, for some time now (a few years), has no longer been possible. The stream of foreigners diminished, to the point of stopping altogether a few months ago. This country, whose safety we would have bet on only two/three years ago, has today become off limits for westerners.

This fact has created difficulties also for organisations like ours; it is impossible to go to Mali, to see how the projects are going, and to assess the needs of the people; we have increasingly had to rely on the local associations that we’re already collaborating with.

The established projects are continuing, but it isn’t possible to start any new ones.

As a result of this emergency situation, we, together with other associations that have been operating for several yeas in the Mali territory, started collaborating, creating a network (MALI NETWORK), which, in the summer months of 2012, sent food aid to the Malian people.

At the moment, following suggestions of the Italian Ministry for Cooperation, which we are in contact with, MALI NETWORK is trying to send health aid to a refugee camp in Saagniogniogo, 25 km from Ouagadougou, in Burkina Faso.

It’s important to us not to abandon the Mali people, with whom we have established a relationship of esteem and friendship over the years, despite the difficulties that this new situation creates.