The fairytale written by Emanuela Nava, and illustrated by Giulia Re, will be handed out in the neonatal intensive care department of Del Ponte Hospital. The touching story was written to help overcome the anxiety of uncertainty. 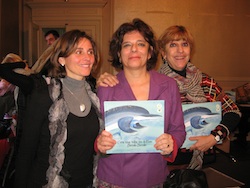 “Once upon a time, there was a little, little dolphin …” A fairytale is going to be given to mums going through the moving experience of neonatal intensive care at Del Ponte Hospital, an all-absorbing experience, of anxiety and hope, of pain and joy, where life is suspended, clinging to an uncertain future. This morning, numerous mums and dads, with small children in their arms, took part in the presentation of the book (published by Carthusia) written by Emanuela Nava and illustrated by Giulia Re, which will be in bookshops on 24 January, priced €15.90.

The story came to life in the department of Del Ponte Hospital, in Varese, which is directed by Dr Massimo Agosti. It is the result of listening to the strong emotions of those who are going through the experience of intensive care, entrusting their little, very little children to the doctors and nurses, in the hope they will be able to give them the possibility of life. The idea for the book came to the illustrator, Giulia, who, distraught after an experience of intensive care, decided to recount what she had been through, describing how it had affected her and how she had come to terms with it all, for those who find themselves, will, might, find themselves, in a similar situation. Thanks to the enthusiastic response of the publisher, Carthusia, Giulia contacted Emanuela Nava, who put pen to paper to describe the anxious journey of a mummy dolphin struggling with her defenceless calf. The project received enthusiastic support from the parents of “Tincontro”, an association that supports neonatology in Varese, who will be distributing copies of the book to parents in the department.

In the story of the little dolphin, parents discover new situations and emotions, and learn to share, to rely on the group, on the family, on the doctors and nurses who are working in their place. They depend on Dr. Maria Elena Bolis, a psychologist, who, for nearly twelve years, has worked closely with the parents, supporting them in their emotional, occasionally devastating, battles. They relate to other parents, in attempt to alleviate the burden of frustration.

“We have 20 beds in our department,” the head physician, Massimo Agosti, explained. “About 7% of babies are born premature. We have about 300 children every year, also because we’re the reference centre for the province. Technology and science have made great strides; twenty years ago, the survival rate was about 10%, today we have a mortality of 7-8%. We have children that weigh less than one and a half kilos, and some that weigh even less than a kilo. Of course, the smallest ones are also the weakest. But it isn’t just a question of helping them to survive, but also of ensuring that they grow properly. Once they’ve been discharged, we guarantee the follow-up; we’re available for anything, we try to respond to all needs, because every child is different.”

This is why the association “Tincontro” is supporting a project to provide home care, which began recently: with the collaboration of “Melograno” (an association that supports new mothers), volunteer mothers are trained, and make their time and skills available to help other mothers in difficulty, in their homes. “The presence of the parents is an integral part of the treatment,” Dr Agosti explained, “not just medicines and instruments, but also kangaroo mother care.”

And so, collaboration and harmony are the characteristics of neonatology and neonatal intensive care, where the work that is currently being done does not appear to interfere with the quality of the health care. “There’s no interference between the hospital care and the work being done at Del Ponte Hospital,” the general manager of the hospital, Callisto Bravi, concludes. “We’ve just had an inspection by the local health authority, who didn’t find any irregularities.”