The notes will be in circulation from 2 May. The watermark and the hologram portray Europa, the Greek mythological figure, after whom the new series is named. 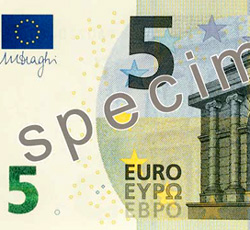 During a ceremony at the archaeological museum, in Frankfurt, the President of the ECB, Mario Draghi, symbolically signed an enlarged copy of the new €5 banknote, the first of the new series, which has been baptised “Europa”, and which will be replacing those that have been in circulation now for 10 years. The new notes will be available from 2 May, from bank counters and cash points. The ECB estimates that, throughout the euro zone, the new €5 banknotes will be more popular, by autumn 2013, than those of the first series.

Reinhold Gerstetter, an independent graphic designer from Berlin, is the person who renewed the graphics of banknotes. The watermark and the hologram portray Europa, the Greek mythological figure, after whom the new series has been named. The emerald green number, the most evident element, changes colour from emerald green to dark blue. On the edges of the notes, there are hyphens in relief, which make recognition easy, particularly for the visually impaired. These security features, which every note will have, are simple to check using the “ touch, look, move” method.