In Italy the birthrate is falling 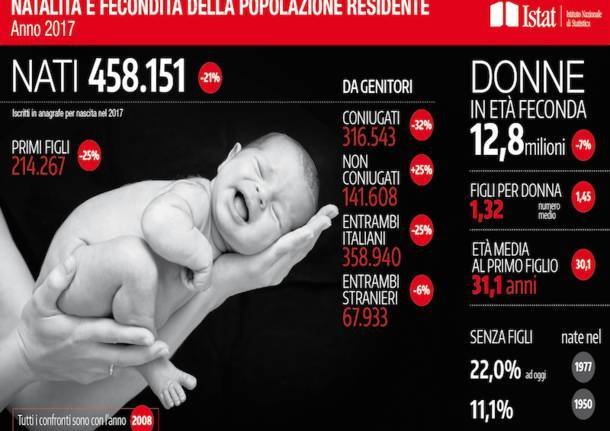 The birthrate has fallen by 21%, over ten years. The official Istat data on birthrates are worrying because they indicate a structural situation with a decrease of more than 120,000 babies born compared to 2008.

The declining female population between 15 and 49 years (about 900,000 fewer women) observed between 2008 and 2017 explains almost three quarters of the difference in childbirth that occurred in the same period. The remaining portion depends on the ever-lower levels of fertility.

In a context of decreasing births, those that occurred outside the marriage increase by almost 29,000 units compared to 2008, reaching 141,608. Their relative weight continues to grow, reaching 30.9% in 2017.

The reduction in the average number of first-born children per woman between 2010 and 2017 is responsible for 68% of the overall decrease in fertility of Italian women and for 81% of that of foreign women.