Starry woods and virtual immersions: the Archaeological Museum wants to reborn in this way

The council has approved the participation to the notice of the Lombardy region and Cariplo foundation. Details of the project illustrated in advance to the members of the Culture Committee 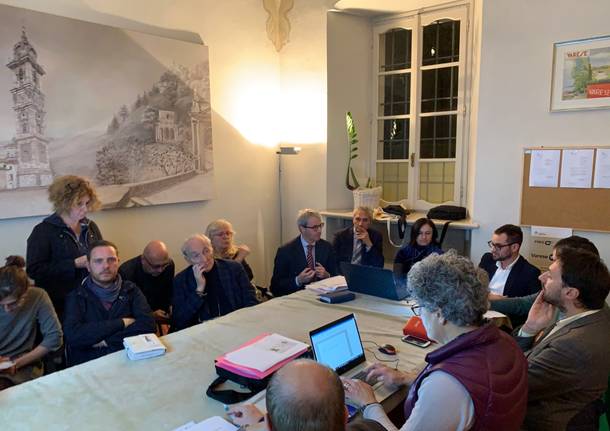 The archaeological Museum of Varese with its preciousness, hidden for now, will change skin and will address to an audience of fans but not experts.

“Var-water lands: in the Varese area archaeology rebirth”: is the title of the project that the Municipality of Varese together with the association “Conoscere Varese”- Castiglioni Museum, at the municipality of Angera, of Arsago Seprio, of Sesto Calende and with the Varese Province and together with the Superintendence archaeology and landscape for the provinces of Como, Lecco, Monza and Brianza Pavia, Sondrio and Varese and with the University of Insubria (degree course in sciences of the Communications), will present in the context of Pic “Piano integrato della cultura” of Lombardy Region made according to the collaboration with Cariplo foundation for a strategic planning to a cultural base.

In the morning of 29th of October the council of Estense Palace has approved the participation to the notice and in the next few days together with all partners and supporters will be announced details of the project that, in the Varese part were illustrated in advance the same evening to members of the Culture committee.

“We are involved in a journey that will value our museum linked to water. We will present by the end of November the project that the council approved this morning. This new element inserts in a cultural policy pointing to enhance our museum and our landscape. In the last few months we’re really seeing the benefits of a system that is aimed at making our city better known, valuing richness and promoting them to the fullest”, Davide Galimberti, mayor and councillor of the culture ad interim, has explained to the Commissioners.

The aim is to achieve an archaeological museum widespread in the Varese area through a series of actions specific and innovative as, for example the realization of multimedia installation which can allow tourists to live direct experiences of achaeological heritage of our territory among the museums involved therefore, there won’t be any only of Villa Mirabello and the Castiglioni museum in Villa Toeplitz but also those of Angera, Sesto Calende and Arsago Seprio.

In the project that will be officially presented in the next few days, there are particularly innovative proposals, especially for the extensive contents of the museum of Villa Mirabello. “With a view to enhancing the Celtic/Roman heritage, which in an initial analysis was not very attractive to the public and was not very comprehensible to tourists and citizens”, explained Daniele Cassinelli, director of the civic museums, describing the project.

Together with additional tools such as web communication, the study of an integrated ticket and themed poster designs to be placed on the bike path, the project provides for a profound renovation of the rooms of the museum.

“Before entering the rooms containing the finds, the idea is to let visitors pass through an immersive room to recreate the times of the stilt houses, and to create the waiting for the pieces that will then be seen in the following rooms. After the first underwater excavations we could see the stilt houses from under the water surface, filmed by a Go Pro. It was exciting. We would like to recreate the same wonder in people. In addition, now pieces are divided by excavation, later we want to show them in chronological order.”

Particularly important pieces, such as the stele of Vergiate or the tomba del Guerriero (Tomb of the Warrior) “Pieces known among scholars around the world” will have special installations for them; the stele of Vergiate, for example, will be surrounded by a forest of stars.

“We have the oldest pile-dwelling site in the Alps. Many people ask me “I’m going to the Isolino! Can you see the stilt houses?” and I am forced to say no: but it is important to give at least the idea of stilt houses to those who come to visit us. And because we are the civilization of the image, it is important to give the impression of making the user feel inside the lake – explains Barbara Cermesoni, new curator of the archaeological museum.”

“Let it be clear, however,” concludes Cermesoni, “that the scientific side, purely archaeological, will not be lost. In particular, the panels of Doctor Banchieri will remain, because she has done an exemplary job from the scientific point of view. However, we would like to create the possibility of a double fruition of the museum, both for a general public and one for scholars and passionate experts.”

THE COMMENTS OF THE COMMISSIONERS

Among the speakers on the subject was Simone Longhini, who commented: “I see the project in continuity as done previously, adding elements that objectively did not exist in past years, as multimedia ways of illustrating. In addition, the cooperation of other institutions seems to me to be particularly positive; networking museums and institutions is important. The aspect on which I would focus most, however, is that of tourism; the most important thing is to be able to involve people who come to Varese from outside, even more than the citizens. The museum could do what Nature Urbane has not been able to do, namely to bring in “people from outside’.”

For Enzo Laforgia: “It is not only those who come from outside who need a new fruition of the museum. In my case, for example, it’s been thirty years since I once visited the archaeological museum in Varese. I also need, in my own way, a certain ‘re-education’. However, it should be highlighted that the multimedia and immersive outfitting is a very delicate thing, and I hope that we will be able to operate effectively a mediation to bend the multimedia aspect to scientific rigor.”

Francesco Spatola, chairman of the committee, finally asked if the refurbishment of the museum of Isolino Virginia will go in the same direction: “Even the museum of the Isolino will be redeveloped with a view to greater multimedia,” explained Cassinelli. “It’s project is however linked to the announcement Varese4U – Archeo, which is already in the executive phase, and it is put into practice by the Centro Gulliver in collaboration with the superintendence. In particular, a video room that tells the story of the excavations on the Isolino is being built on the ground floor and, among other things, an immersive structure to feel inside a Neolithic hut is being built upstairs.”