From Cannero to Luino on a Vespa, riding the waves of Lake Maggiore

Alessandro Pozzi, a Vespa rider from Jerago con Orago, is launching the “Traversata per la Vita”, a fundraising initiative to be completed on a very unusual means of transport. 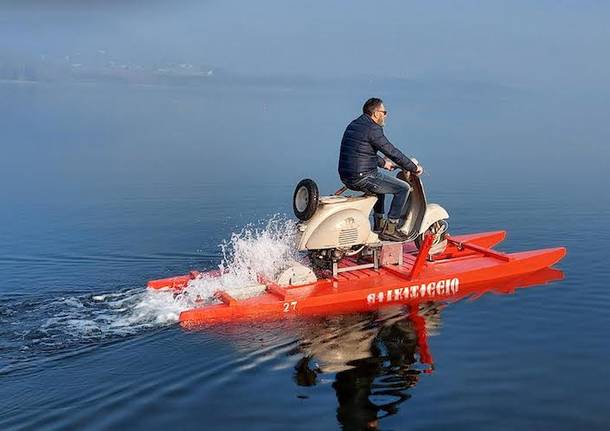 Sunday, 13 June. This is the date of the new charity fundraising challenge, the “Traversata per la Vita” (“Crossing for Life”) by Alessandro Pozzi. This time, the Vespa rider from Jerago con Orago, who has already taken a number of solidarity trips around the world on his vintage Vespas, is going to make a record crossing on his “Peraspera”, a completely original, 1959 Vespa, fitted to a 1960s twin-hulled boat, which, until 3 years ago, was part of a regular rescue service on the coastline of Romagna.

The pandemic makes it difficult to move from one State to another, but to support the projects of the Giacomo Ascoli Foundation for children with oncohaematological diseases, Alessandro is going to travel in a different way: he is going to navigate Lake Maggiore, from the Cannero Riviera, on the Piedmont side, to Luino, on the Lombard side; the “voyage” should take him about two hours, weather permitting.

THE VEHICLE AND THE MISSION

The Vespa Peraspera will be fitted to a twin-hulled boat which, thanks to a mechanism of blades, pulleys and belts, will propel the boat forward, to complete the crossing.
This combination of the Vespa and the boat has led to the creation of a truly unique and original water vessel, which has been approved by the navigation Authorities.

Alessandro wanted to keep the twin-hulled boat as it was, with all of the signs of time, wear and age, including the writing “SALVATAGGIO” (“RESCUE”) precisely to emphasise the goal of the initiative, namely, to help “save children” at the Varese hospital’s paediatric oncohaematology day centre, which was established and is supported by the Giacomo Ascoli Foundation, to provide the best possible treatments for young patients fighting these diseases.

The only customisation of the boat, apart from the Vespa propelling it, is the number 27 painted on it, in memory of Giacomo Ascoli’s date of birth, the day in February, in 1993. It is to Giacomo, who died at the age of 12 from non-Hodgkin’s lymphoma, and to his memory that the fundraising effort of the “Due Ruote per la Vita” (“Two Wheels for Life”) project is dedicated; like last year, the aim of the project is to help contribute to improving the quality of life of young paediatric oncohaematology patients and their families, through the commitment and services provided by the Giacomo Ascoli Foundation, which, at the same time, works to increase their chances of recovery. “The invaluable contribution of ‘Two Wheels for Life’ will enable us to co-fund a researcher from the University of Insubria to work at the day centre for three years, starting in 2021, to determine the best therapy for each patient,” explained Marco Ascoli, the Chairman of the Foundation, and father of Giacomo, as he thanked Alessandro Pozzi for his tireless commitment.

THE FIRST LAKE CROSSING ON A VESPA

The only two crossings in history that have been made on a Vespa have been on the sea, and on different vehicles, neither of which had been type-approved. One was the crossing of the English Channel, by Georges Monneret, on 8 October 1952, and the other was the crossing of the Strait of Messina on a Vespa, on 30 July 2017, by Francesco Foti, “a friend who died recently after a tough battle with a serious illness, who I’d also like to remember with this crossing,” said Pozzi.

Follow the developments of the crossing on the Facebook page of Due Ruote per la Vita (https://www.facebook.com/Altruismolanostrameta/).