Making hay like in the past? “Ecological and fun, but nobody knows how to use the sickle any more”

Not a single local farmer is able to teach how to use our grandparents’ sickle any more: they all have strimmers, which, with their two-stroke engines, pollute as much as 100 cars. But there are some who suggest going back to the old days. 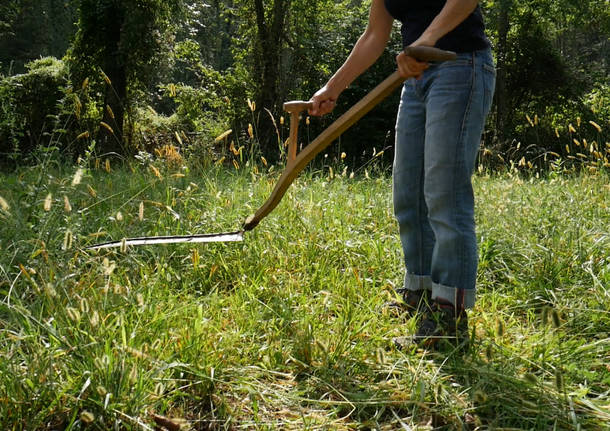 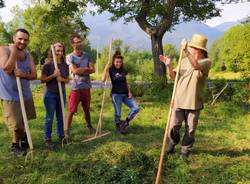 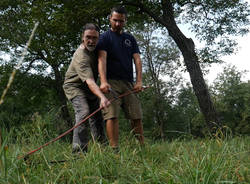 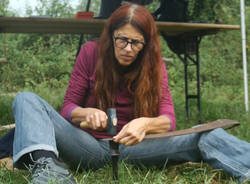 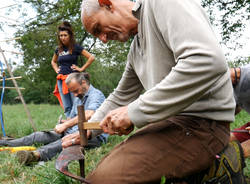 The lawnmowing of the season is usually at the end of September, but as the temperatures are still not very low, it may still be possible to cut the grass before the dew turns to frost, a sign that winter has come, when nature goes to sleep, as it waits for the warm weather to return.

Valcuvia, lessons on how to use a sickle, like our grandparents

But anybody thinking of the sound of the strimmer or of farm equipment with its internal combustion engine should think again, as there is a growing movement in Valcuvia that would like to return to the old days, if only to pass on a now lost tradition, that of cutting the grass by hand: haymaking, as it was done in the past. 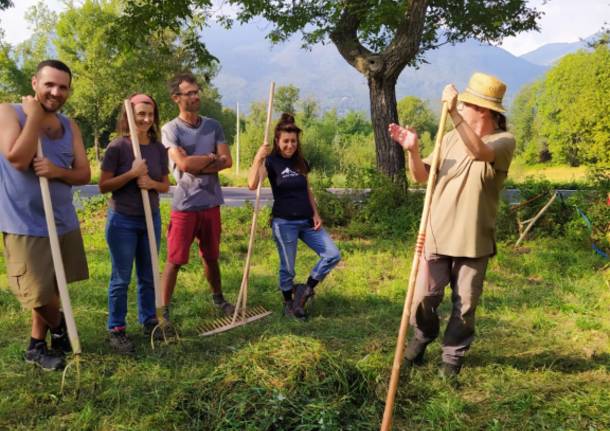 You might have noticed a group of people struggling with a metal sickle, trying to learn the right forearm, shoulder and pelvic movements to get the blade to “almost touch” the field, while maintaining the ecosystem, with stems that remain long and not pulverised by the “0.4” string or blade of strimmers that are noisy and pollute.

“What’s the matter? I’m just cutting the grass; there’s nothing more ecological and green than that …”

You may well think this.

The “Section for the Protection of Air, Water and Soil” of Canton Ticino (so it is an official website of the cantonal authorities) explains the extent of the pollution caused by two-stroke combustion engines. “It is hard to believe that small tools can have such a significant impact on health and the environment,” the Swiss authority writes.

“And yet, a lawnmower emits the same amount of fuel as 26 cars with catalytic converters. When it comes to chainsaws and strimmers, the situation is even more critical; the emissions are equal to those of 100 cars.”

To solve a problem that is a significant source of pollution, the advice is to use an electric lawn mower, or the less polluting models with four-stroke engines. “A simple solution is to use a special, low-emission fuel called alkylate-based petrol,” the website continues.

Alternatively, you can learn to use a sickle.

But here too, problems arise, as (and this may be hard to believe) nobody is able any more to teach how to use this tool, which was once so widespread in the countryside (not surprisingly, the earliest images of 20th century, in the masterpiece by Bernardo Bertolucci set in the countryside near Parma, are legendary).

All this is confirmed by Paola Castiglioni, the founder and activist of the association “Matrioska”, which was founded in July 2020 in Orino. Today, it boasts about fifty members, all looking for reference points that meet the real needs of the area and all with the goal of planning community development by cultivating biodiversity.

“On the European Day of Sustainable Communities 2021, September 18th, we decided to organise a meeting to rediscover the practices of haymaking using a sickle, exploring its anthropological, cultural, ecological and naturalist implications. To do this, we got in touch with some agricultural companies in the area, to see whether some might take part in our initiative. To our great surprise, we realised that the sickle, which was once an essential tool for ensuring that animals had hay, is now practically unknown, even by those who work the land.” 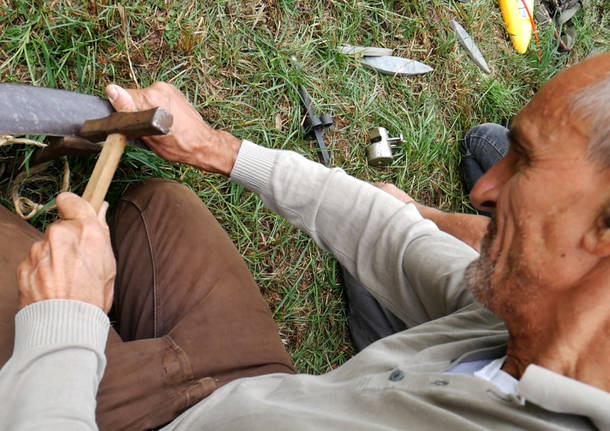 Of course, local farmers know what the sickle is, but it would appear they do not know how to use it, or at least are unable to explain how. So the association contacted Olivier Fontaine, a permaculture expert and lecturer in Meteorology (from Turin), who illustrated cutting systems, most importantly, how to prepare a sickle (or “ranza”, as it is known in these parts), which starts with beating and grinding the blade by hand, followed by preparing the lengths of the supports, which assist the cutting. Although the movement seems to be almost automatic, it must first be learned: the stroke of the blade should be neither too high nor too low, with respect to the height of the soil, but at the right height, so as to graze, almost caress the soil.

With this movement, it is possible to cut large fields, ensuring respect for the microecosystem hidden in the fields, which is made up of small insects and reptiles, invertebrates and mammals, which often fall victim to tools and larger farming equipment, which not only pollute the area, but also have little respect for the plant and animal life.

It is certainly a laborious system that can hardly satisfy the goals of intensive farming, but it is an alternative for small areas of green, which, in this way, are respected, without pollution (also from an acoustic point of view).

Young people and children will also take part in the initiatives of this association, and thereby, learn to respect the land and get to know traditions that have now vanished.