Piero Chiara is brought back to the cinema, with “The Magistrate”

The film, made by the production company of Sarah Maestri, Chichinscì, will be ready in the spring of 2013. “We’ll take this film to Venice and Locarno.” Expected budget: €3 million. “I want to get people from Varese to act.” 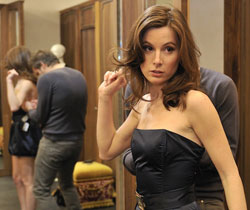 Snow-covered mountains that plunge into Lake Maggiore, the old cobbled streets, the alleys and doors of Luino, but also of Varese and Valcuvia. These are scenes that we will soon be able to enjoy at the Film Festivals of Locarno and Venice, and more simply, on the big screen, in the next production based on Piero Chiara’s novel “The Cuvio magistrate”.

The film, which will be entirely shot in Varese Province, was presented on 6 November, in Villa Recalcati, which, incidentally, is the probable location for some of the scenes. The film is being produced by Chichinscì SRL, the production company of Sarah Maestri, who was seeking to venture into filmmaking, after her experiences as an actress.

But there is no guarantee that a part, or maybe “the” part in this story, which, like so many of Chiara’s writings, speaks of the men, women, misfortunes and virtues of a province that is not so “out of date”, will be given to Sarah herself. “A shrill voice and freckles,” is how she was paternally described by Federico Roncoroni, who Chiara gave the task of guarding the moral integrity of his writings. Roncoroni met her today for the first time, and cast her on the spot. “She will be Evelina.”

It is the 1930’s, in the middle of the twenty-year period in the green Valcuvia, amid mountains and lake, Luino and the microcosm of little villages scattered about this strip of land that borders Switzerland. It is the story of Augusto Vanghetta, an ugly lawman with uncontrollable sexual desires, who marries Evelina Andreoletti. In the role of the silent wife, Evelina has to put up with here husband’s extramarital affairs. But something happens, when a new male figure is introduced into the domestic situation. The story is one of sex (which is never described, but only “takes the readers to the door of the bedroom,” as Chiara himself used to say), of little and big lives, a provincial story, that becomes the focus of the tale.

“I have lived in Rome for years, but when I can, I come back to Luino, to the birthplace of Piero Chiara, one hundred years ago. This is why I’ve chosen to make this film here,” said Sarah Maestri, who was in no way nervous in her role as the producer. “It is not by accident that the production company is called Chichinscì, which, in dialect, means ‘around here’. To be honest, I don’t sleep at night, because of the journey, and I occasionally wonder why I’m going to the trouble. But I’m sure we’ll manage.”

Time is short: inspections of the locations are in progress, in Luino and Varese, Palazzo Verbania, on the lake shore, is being transformed into the logistical headquarters, with changing rooms, makeup and hairstyling included. Casting is also in progress (“big names in Italian cinema”), the search for extras (“who we hope to find in the area”); filming, processing and editing must be ready at least by May 2013, right for the film festivals.

Costs? “Our budget is around €3 million,” Sarah Maestri explained. “Setting up the company alone took €40,000, all of my savings. Then to purchase the rights, another €70,000 went to Mondadori. Then there are the costs of production and of hiring the actors. I really hope it costs less than expected. But I must say that I believe this project is important for this area. We’ll be giving jobs to a lot of people, we’ll create business for other companies, and attract interest. This is why I’m asking everyone for help: from the baker, who’s going to give us croissants, to the hotelkeeper, who’s going to provide bedrooms. To the world of economics. On 16 November, I’m meeting entrepreneurs and industrialists at the Chamber of Commerce, to explain the project, and to obtain resources. When it comes to the authorities, I’d like to thank Varese Province, and Varese Town Council, who will be helping, and the Cariplo Foundation, who have made publicity available.”

In the hall, there were representatives from Luino, Varese and Cuvio and Varese Province, as well as a number of representatives from the world of culture, including Bambi Lazzati, who was the intermediary between Maestri and Roncoroni, between production and the availability of the rights.

Nothing about casting, yet. Who is going to play the main part? Well, the clips that introduced the main film adaptations of Chiara’s novels, certainly set the imagination off. Who will be following actors of the calibre of Ornella Muti, who had few words, but a face to fall in love with in the role of the marvellous Matilde in La Stanza del Vescovo (The Bishop’s Room)? But most of all, who will follow the incomparable exploits of Ugo Tognazzi (Venga a prendere il caffè da noi (Come have coffee with us), based on La spartizione (The sharing)), and of Johnny Dorelli (Il Cappotto di Astrakan (The Astrakhan Coat)). Not to mention those who played other characters, such as the great Francesca Romana Coluzzi and the sly Milena Vukotic, the perfect “Tettamanzi sisters”, in Alberto Lattuada’s masterpiece. The choice is one of great responsibility, if the intention is to follow along the path that was begun in the 1970s with these films.

“I won’t say anything about the actors,” Sarah Maestri said defiantly. The scriptwriters are Dino and Filippo Gentili, and the director will be Toni Trupia.”