The refugees of Gallarate found their way

A positive case in the province: the 31st of December, most of the young people that escaped from the war in Libya have left Gallarate to live in Italy or in other European states. Only two of them will stay in Villa Calderara that will be the headquarters of Exodus and space for the Cedrate neighbourhood. 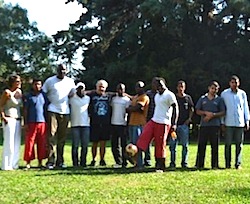 The refugee emergency has officially ended and after escaping from the war of Libya, they are starting again their lives: by the 28th of February, they will leave the building where they are living now. And even if in Varese the situation is quite critical and the refugees have spontaneously demonstrated in the last days, in the province there is the opposite: in Gallarate, almost all of the refugees who arrived in July 2011 have already found their way in Italy, but also in foreign Countries too. In Gallarate, some young Africans (and some Pakistani) that escaped from the war, were accommodated by the Municipality in a mansion that is one of its properties and that is under the custody of the Exodus Foundation of Father Antonio Mazzi: “together we followed different the cases and developed paths of autonomy” explains Margherita Silvestrini, the Assessor of Social Care. This way, the refugees restored contact with their families and acquaintances in Italy and Europe, they looked for a job and found a new accommodation.

The end of the subsides paid by the Government is not causing problems here, even though some people are still living in the mansion on the hill of Cedrate: “in total, 30 people stayed here,” adds Silvestrini. “Very few of them were expelled because of the lack of requirements, the most part of them obtained a permit and were helped to reach their autonomy and their families or acquaintances in Milan, in Italy, and also in Belgium and Sweden too. We created successful exit paths.”

Almost all the people have obtained a temporary permit of a year, two Somalians have obtained a longer one (3 years) and the political asylum, which does not have a deadline: precisely the two young people from Somalia have been among the first ones to leave, one of them has even gone to Sweden. At the end of November in Villa Calderata in Cedrate only 14 young Africans were left, after the  31st of December even the last guests had left: “Today we have only two refugees, which will stay in this helping period until 28th february.” One is waiting for the call to a temporary reception structure after the verification of the requirements, the other one (the football player Abdoul Diaby, in the photo on the left, taken in the 2011 summer) is finishing the rehabilitation after a surgery operation and he is looking for a job.

In general the experience in Gallarate was successful, at least avoiding the tensions that occurred in other areas. On the contrary: even people with negative experiences (as two refugees which caused problems in Samarate) have been welcome and managed in a positive way. All this, despite the difficulties that the refugees have had during the long months of wait for the permit, of forced inability and tensions that occurred in some moments. In Gallarate, money from the Government has been employed not only to find an accommodation (choosing a Municipal property instead of a hotel), but also to create integration and help paths, thanks to the cooperation with Exodus, but also with the city and province associations (for example in sport), with the Islamic community and the Bangladesh one which have cooperated most of all in the first phase. The refugees worked for the Municipality and the stay of a year and a half in Villa Calderara was an occasion to start the restoration project for the building that will become an Exodus headquarters but also an area available for citizens. For example the park that exactly the boys from Libya started to fix during the 2011 summer.