Silk-throwing in Garabiolo, from the mountains, a challenge to the Chinese

The company, which has been in the hamlet near Maccagno for more than 50 years, employs 30 people, keeping part of the textile production chain going. 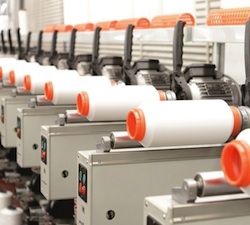 Hidden among the villages in Val Veddasca, just ten minutes by car far from Maccagno, the silk-throwing factory of Garabiolo is one of the few left in the area around Luino. The company has been owned by the Marazzini family since 1959, and it manages to survive, despite the crisis, and Asian and European competition. Sheltered by the mountains, TFS manufactures a quality product that is a perfect mix of tradition and innovation that, despite everything, is keeping Italy going.

The silk-throwing factory in Garabiolo, which is far from the village centre and more than an hour from the nearest motorway, completes with the Chinese. How do you do it? The owner, Giovanni Marazzini, sighs.

“You forget that it’s almost two hours from our offices in Parabiago … It’s still going thanks to all the investments made over the years. Basically, we invested everything we could in development, purchasing machinery that consumed as little energy as possible, considering that costs are very high in Italy, and concentrating on a quality product.”

When was TFS founded?
“The factory was bought in 1959 by a great-uncle of mine. He loved these parts, and every Thursday, he came here to fish. One day, he happened to go up the valley, and while walking past this old spinning mill, he was fascinated by it and decided to buy it with a specific goal in mind. My family has always produced hosiery in Parabiago, and so he thought he could manufacture the yarn for the hosiery factory.”

But today, you make another kind of product here …
“Yes, we do, because the market underwent a considerable evolution, and the hosiery factory managed to find cheaper suppliers of manufactured yarn. So we changed from throwing silk to spinning synthetic fibres, like viscose and acetate.”

So, also another type of market …
“Exactly. Today, around 70% of our turnover comes from foreign countries. Among other things, we have been one of the first businesses to import from Korea and China and we also have important partners in Europe.”

Who are your customers exactly?
“Over the years, we’ve specialised in curtains and furnishings,” explains Martino Petrolo, the Sales Manager. “Today, we’re also selling to weavers in Como, who work for big luxury fashion brands. For example, our yarns are used to make the lining for jackets, the bags of important labels, and so on.”

And what about furnishings?
“We’ve concentrated on particular yarns, such as the flame-proof yarn, which is in great demand from hotels, theatres, ships, casinos, and so forth,” explains Giovanni Marazzini. “The new safety standards have established very strict rules on this matter. And so, we’ve reached customers, such as the Bolshoi Theatre, in Moscow, and La Scala, in Milan. We’ve recreated all colour shades of the silks used in the theatres, using flame-proof polyester, recreating a similar, quality product that conforms perfectly with the standards.”

Let’s return to Varese …
“This province is one that has strong historical links to these industries, and yet, the production chain has become increasingly short, and the crisis is forcing many companies to close.”

What relationship do you still have with the area?
“There was once important know-how in this valley; companies didn’t exactly swap employees, but very nearly. In other words, it was a real labour market. Now, with the crisis in the sector, and the closure of the spinning factories over the years, we have to train the staff, and not everyone is willing to do a job like this.”

How many employees work here?
“In TFS in Garabiolo, there are thirty employees, but the offices and the logistic warehouses are in Parabiago, where we have the same number of employees, also because they wouldn’t fit here, because of the lack of space.”

And has the level of employment increased over the last few years?
“In thirty years, we’ve gone from 20 to 30 employees, but we’ve reached the limit. Today, one of the problems linked to this work is training. If we’ve got an employee retiring, we start the training of the new employee about two years before. The bright side is that here, in the valley, we’ve always found people who love this profession; it’s important for them to respect the working hours, and they persevere.”

How is the twisting work organised in Garabiolo?
“We have 3 shifts, round the clock, seven days a week, including Christmas, New Year’s Day, and Easter.”

Here the administration listens closely to you, but is this aspect still important?

“It’s absolutely essential, especially nowadays. You’ve seen the road that leads to the factory. It just takes a heavy snowfall to stop shipments; summer storms have caused many a power cut. For small incidents like these, due also to the location of the company, we turn to the administration, who have always helped us.”