Awakening Spring to the sound of cowbells

It is a tradition that is repeated every March, and involves children. This year too, one hundred students will be taking part in St Aubin's day. 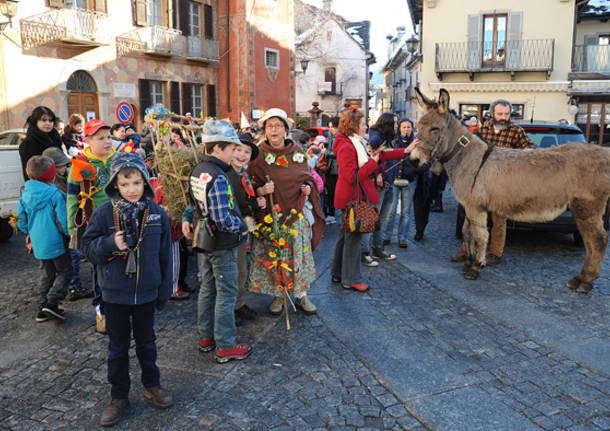 Tuesday, 1 March, the “St Aubin Mission”: in Santa Maria Maggiore, dozens of children will be trying to awaken the greenest season of the year.

Like every year, the Piedmont valley between Lake Maggiore and Switzerland is preparing for this unmissable event, which is a cross between folklore and tradition.

Indeed, according to the historical memory of the Vigezzo Valley, 1 March, the day dedicated to St Aubin, is celebrated in the streets of the main town, Santa Maria Maggiore, with the sound of cow and sheep bells, to awaken Spring after the rigours of the winter.

So, also this year, the town of Santa Maria Maggiore is organising the event that children and adults are eagerly looking forward to. It is a genuine tribute to past folk traditions, in which nature, and its cycle, were an integral part of the everyday lives of the locals.

On Tuesday 1 March, the little inhabitants of the Alpine village will walk along the streets, along a definitely noisy route. There will be 100 children taking part in this characteristic “awakening of Spring”. The children, with their heads adorned and animal bells in their hands, will be meeting at 9.30 a.m., in Piazza Risorgimento. Then start genuine “playing competitions”, to show who is best at waking up Spring. The retailers of Santa Maria Maggiore will reward the children’s hard work, with some small gifts and products for a tasty break.

The walk will start in the square in the centre of Santa Maria Maggiore, and proceed through the countryside, to Crana and Buttogno, and then come back to the centre of the village, at around 12.30 p.m.